The Next Best Thing to Nanay's Home-cooked Food

July 13, 2007
Hooraaaaay! After 6 weeks of being closed for renovation, the Cafe By the Ruins re-opened yeseterday!

All the classics and favorites are still on the menu, like Patring's Goodies and Ole Nick's Open-face Tuna Sandwich-- to my knowledge, the only specials that never left!

There are lots of new goodies too, featuring this season's produce; such as fresh guava juice, and 2-mushrooom crepes, which is what I had for lunch. 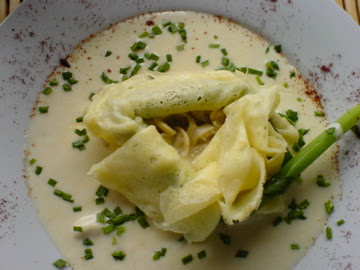 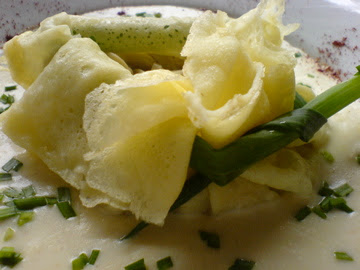 Mine, all mine!
While I was enjoying my lunch, I surveyed the Cafe clientelle that had come for the day, and tried to guess who was what. 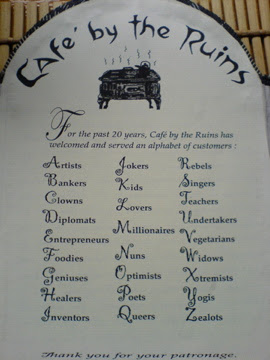 Which one/s are you?
People started streaming in for late lunch, and first among them was the family that owns the Baguio franchises for McDonalds. They entered at an excited, brisk walk, declaring to all within earshot as they entered, "Nakaka-miss! We could hardly wait for it to open again!" But of course! What was I thinking? That they eat burgers and fries all year round? They probably don't even touch the stuff, having had an insider's look at how it gets made.

As I left, another familiar face approached at an unhurried pace: An old man with dark, leathered skin, who whiles away his time relieving people at jeepney stops of their small change, and who carries his spear with him as a walking stick. He nodded solemnly to the waiters and took his place in the gazebo outside, waiting for his coffee and pan de sal to be delivered to him there.

"All our regulars are back," declared one of the waiters with an air of satisfaction.

Anonymous said…
I miss CBR. Even their champorado is unmatched! A real santuary. Last time I was there, Christine was still around. Miss everyone even the waiters and the manangs! Can you imagine?-J&D
13 July 2007 at 21:38