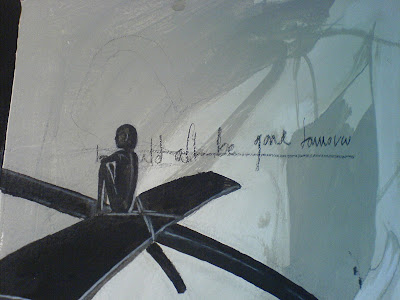 When I spoke to Kawayan late last night he was still putting finishing touches on his pieces and packing them up for the trip to Manila. (Alright, we know it's actually "Metro" Manila and that you've got a whole lot of cities thrown into it but to us it's just this huge unbearable monolithic urban mess that we call Manila. If some one says they have to go down to Manila, it's explanation enough. We don't have to know whether she means Quezon City or Pasig. We are instantly sympathetic.)

Tomorrow, Saturday the 28th, Kawayan opens a one-man exhibition, called Incubator, in the Drawing Room. I bet no one at the opening will notice how the show didn't completely come together until the very last moment. I wish I could be there to see how the final headless chicken moments become a seamless show. Yes, I would consider going to Manila for that, but instead the following paragraphs Kawayan asked me to write are making the trip for me. Also last-minute. 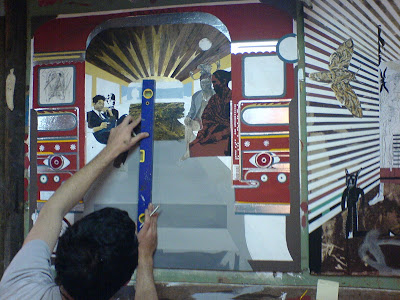 Kawayan introduced the rooms to me one by one: “This is Ben Cabrera’s. This is Santi Bose’s. That one is Rene Aquitania’s. This one is Tatay’s. That one is Agnes Arellano’s. Then that’s Tommy Hafalla’s. And this is Robert Villanueva’s. All of them have influenced me or helped me in some way. Mga Guro. Mga Tumulong. (Pause.) That’s mine. And this one, it could be all of them or many more. Or it’s about the process of putting them all together.”

Portraits, I said to myself. The canvasses were bare rooms littered with figures and objects of Kawayan’s choosing. Some were already quite full, and some were still spaces waiting to be filled. The persons to whom each canvas belonged had not yet arrived but the objects already suggested whom they were expecting. Basquiat was comfortably seated in one of the canvasses, looking like he had all the time in the world, waiting for one of the artists to come and join him. I was sure that when I would return to meet the works again in a week’s time, I would be gazing at portraits, and they would be looking back out at me from the canvas. 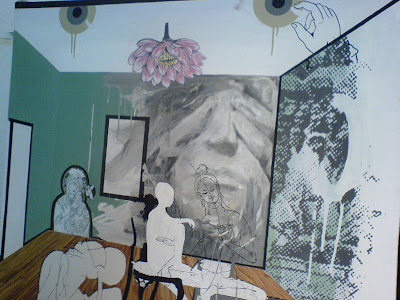 But no, the next thing you need to know is that these are not just portraits.

The second time I went to meet these works, I found myself standing before one portal, peering into the secrets and surprises of seven rich rooms, and wanting to board a jeepney that had one of Kidlat Tahimik’s favorite acronyms penciled unto the side of the entrance: L.I.B.HR.T.Y. Limit Idiot Box Hours, Thank You.

Kawayan said with deserved satisfaction how he was enjoying these painting spaces, how he used various media such as pictures, glue, wood, cyanotypes and fire to create depth. Gazing into one of the rooms, he said, “If I don’t achieve depth then I’ve failed.”

I walked from room to room; visited and re-visited their occupants; waited to hear the rattle of the jeepney’s diesel engine. The occupants didn’t seem to mind my being there. Rather, they didn’t seem to care whether or not I was there to look at them. Kawayan had painted each of the seven artists in such a way that they blended oh so comfortably into their spaces. Some were not even entirely visible. They were simply there. So every space was not just a painting of a room, or a portrait of a person, but a depiction of a relationship with Kawayan. 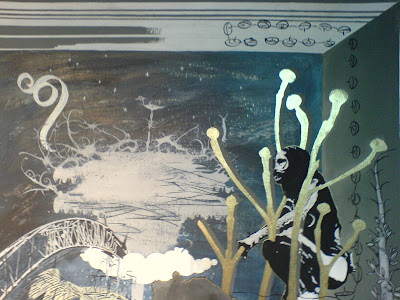 “This is a series that I’d like to continue,” Kawayan explained. “There are more that should be here, like the Akilisans, Willy Magtibay, Katrin… I already did Pepito Bosch (for a different show). It’s about the people but really I’m focusing more on the objects. Because going under them I always felt like I was absorbing more than just their craft or techniques but also their beliefs, their thoughts, and their stand in life. After a while it’s like you become Rene or Agnes because you start to think like them. Then you realize you’re not. You’re you. But then each of them has given me a pillar, which is part of who I am now.” 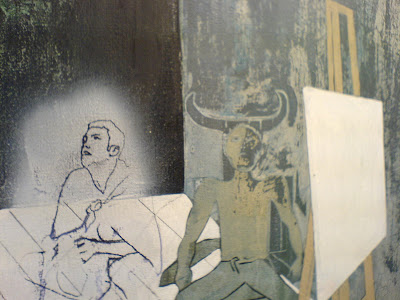 The room with Kawayan in it is the room that brings them all together, but then so is the portal, the little brown door hiding secrets behind it. If the portal is the entrance to the hallway of these works, then Kawayan’s would be the room at the end of the hall.

I pointed to something scribbled on one of the walls of Rene Aquitania’s room. What’s ‘Roam 1999’? I asked Kawayan. 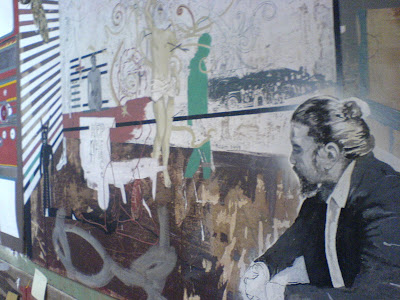 And that is the essence of these works. Pagpapasok. You have to walk into them to feel the life-sustaining warmth contained within Kawayan’s homage to these persons; these artists who have stood by the walls of his art-incubator at various times, sending him vital energies, talking him through the harsh moments, peering in concernedly, and preparing him to step out into the waiting world again and again and again.

The eyes and faces that peer from the walls of these painted rooms seemingly evoke Kawayan’s very first room on this planet, when he came rushing in to join the artists’ world two and a half months too soon. Kawayan’s first ever room was an incubator.

Mayumi Masaya said…
can you do me a favor and just tell him please, to document it properly? please? at film ha :-)

padma said…
Oops, none of these is the 1 for your dad. For SOME REASON, my shots were blurred. (Low light? More mischief?) I heard the Drawing Room was coming out with a catalogue. Maybe one of da brothers could get you a copy!?
11 September 2007 at 10:32