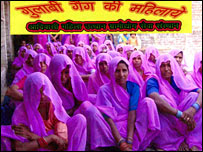 I can't explain why I chose pink for my blog. I have hated pink ever since the day my grade one teacher told me in front of all my classmates that blue could not be my favorite color because I was a girl. She insisted that my favorite color had to be pink. We had a small debate about this. I don't remember who won, but I decided that "pink-for-girls" and "not-for-girls" had to be two of the stupidest rules of the adult world ever and I was going to break them every chance I got.

"Pink, pink, you stink," became my favorite taunt for girls that I thought were "too girly" because they followed the rules. On my 8th birthday I went to school in a blue, glittery disco suit that might have landed me a spot as an extra in Staying Alive. (I was in love with John Travolta.) As I grew up, I consistently rejected and passed on every pink gift I ever received.

But now! Now I have a pink blog. By choice! My tatay is sure that I chose pink just to irritate him, because he finds the color so offensive. My best friend, The Original Mikamood, suggests that red is the color for rage, so pink must be the color for muted rage. Therefore, she thinks pink suits me just fine. And I think she is right. These women illustrate the point beautifully.

The Nashman said…
pink is actually a masculine colour.