January 02, 2020
I was asked to speak today about body language and indigenous expressions, but I can’t talk about dance and I can’t talk about tattoos. My friend, Irene Bawer-Bimuyag dances and weaves so beautifully, she takes away words. She has a traditional Kalinga tattoo on her arm and it is rightfully hers. She is Lubuagan-born.

I can’t talk about performance or performativity. When my friend, Dumay Solinggay takes the stage she brings all her ancestors with her. She is Cervantes-born.

I can’t “speak in tongues” --much less read or write in indigenous languages. My friend, Chatelyne Wansi walks for hours to visit kailian, to sit with them, convince them, and guide them in writing about themselves in their own language. She publishes their writings in a magazine entirely in Kankanaey, and refuses to translate their work into English. She is Kibungan-born.

I wish they could have been here in my place. I wish you could meet them.

Pounding rice, butchering a pig, sipping rice wine or tapuy from a bowl and passing it from hand to hand, mouth to mouth — these too are body language or embodied knowledge. The rituals of cooking and eating, whether mundane or extraordinary, are rituals that extend the body. They are rituals that tell us: You belong. You belong. Of course, there are some eating rituals that can make us feel like we don't belong, but today, I'd like to focus on belonging. 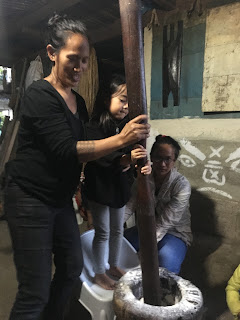 Instead of speaking in tongues, I want to tell you about eating tongues. It was New Year's Eve two years ago in Lubuagan. In the back of the house, Irene and her sisters were taking turns pounding glutinous rice. They chanted and sang in rhythm with the pounding of the rice. Or were they pounding rice to the rhythm of the songs? Sometimes the children were allowed to wield the heavy pestle, which was twice their size. No one got upset when they spilled some rice. There was laughter and gentle instruction, and then the women took over again. The rice flour was transferred from the mortar to a basin and water was mixed into it to make a moist dough. I squatted on the floor with Irene's sister and she showed me how to make inanchila. Chila. Dila. Tongue. Taking one long, ridged leaf of a plant called takong, she showed me how to use the leaf to shape the dough into a tongue, and then how to fold the leaf to wrap the rice cake. Takong grows wild in the hills above Lubuagan. We worked together. Inanchila is prepared for celebrations. Czarina was turning six that New Year's Day. We ate the tongue-like rice cakes for her birthday. 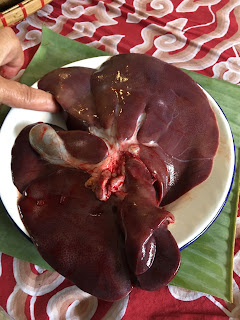 In another gathering in another town, family and friends stand silently around the mambunong, the ritual specialist. He gently pulls the liver from the freshly-slaughtered pig's carcass. He reads the liver's shape, color, and size: is it healthy? Does it have secret pockets that mean good fortune? He reads the position of the bile sac: is it hiding or does its tip peek out from under the liver? His hands, eyes and knowledge, the pig's still warm parts. Here are two bodies speaking to each other. One is a text, the other is reader. When he nods and says the omens are good, everything swings into motion again.


The pig's blood is scooped up into a large basin. The intestines are taken aside to be thoroughly washed. I wait for my turn to help make the blood sausages. To make blood sausages, a funnel helps. Everyone has their own special mixture to flavor the blood. Salt and pepper, of course. Some add finely chopped ginger, garlic, onions, and a handful of sticky rice for texture. You start by knotting one end of the intestines and then fitting the funnel into the open end. Slowly, you pour the blood mixture in and gently massage it down the length of the intestines. Again and again until it becomes meditative. This is one of my favorite tasks when communities gather in this way, whether it's to celebrate, to mourn, or to remember ancestors and to let them know, We have not forgotten you. 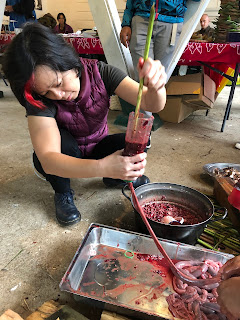 While making blood sausages is something I simply enjoy, there are other tasks that require great skill. In many communities there are a few persons who are skilled at cooking rice to feed hundreds of people. As children we're taught to measure the amount of water to boil a cup or two of rice using our fingers, but can you imagine doing the same for a giant pot over a wood fire? Theirs is a special, embodied knowledge that you won't find in cookbooks. This too, is body language.

Before eating, plates of rice and meat, bowls of soup, and cups of water, tapuy, or gin are set out and the mambunong calls the ancestors to come and partake of the food and drink. And then it's time to eat. A line forms from the cooking area to where people are seated or standing, laughing and talking. The first person in line is not the first person to get a plate full of food. Instead, that person takes a plate heaped with rice and meat and passes it to the next person, who passes it to the next person. Plates of food travel from person to person and hand to hand, until someone takes it and sits down to eat. This assembly line goes on until everyone has their food and the first person in line gets his or her plate. This too, is embodied knowledge.

Indigenous expressions such as these take place in communities, where the movements of people and countless species shape landscapes. There are other bodies in these rituals I've described: the pig, the wood for the fire and mortar and pestle, the takong leaves, the rice, the sweet potatoes that fed the pig.

In many old stories, the plants we eat are said to have grown from the buried bodies of a beloved child or a kind old woman. When we eat, are their bodies speaking to us?

Cooking and eating are rituals in which we partake in and partake of ecosystems. But we are at a point in time in which it is harder to gather and to grow the neighbor species that feed these gatherings. How did we get ourselves to this ecological crisis? Is it because we have forgotten that we are neighbor species of other species?

When we cook and eat together, our bodies remind us that we belong, we are of this earth. Perhaps the only time we belong to this earth more than when we eat, is when we die. 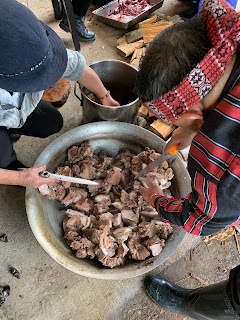 *I delivered this talk at the 85th PEN International Congress held in the National Museum, Manila, on 3 October 2019. The congress theme was Speaking in Tongues: Literary Freedom and Indigenous Languages.