Treasures of the Thunder Dragon

May 22, 2011
Her Majesty, the Queen Mother, Ashi Dorji Wangmo Wangchuck was the first speaker of the 2011 Mountain Echoes Literary Festival. Her session was held this morning, in conversation with the Indian ambassador to Bhutan, Pavan Varma, himself a writer. 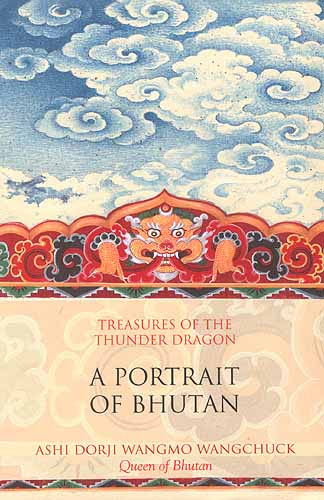 He began by asking her why she undertook a 17-day journey across Bhutan on foot, which she later wrote about in Treasures of the Thunder Dragon, her second book. She replied by explaining that her children had left to study abroad when she was in her early 40's(!) and so she had a lot of time on her hands.

So she carried her own load of personal belongings and accompanied by a small party of companions, she set off on this journey. She decided that they would not bring any tents because they would seek shelter with the people wherever they found themselves. Once, she said, they sheltered under a tree. Each day she walked for 8 to 10 hours.

"I couldn't be away from My Majesty for too long so I had to walk far and very fast."

Her Majesty was struck by the daily hardships endured by her people, but also by the sense of contentment that they had. To this the ambassador remarked:

He asked Her Majesty to speak her thoughts on contentment, Gross National Happiness, and the rapid changes taking place in Bhutan. The ambassador's mobile phone rang! He was very embarrassed and apologized to the Queen Mother as he fumbled for his phone in his pocket.

"Is it important?" she asked sincerely with a smile.

"Change is the only thing that is permanent," she said, in response to Pavan Varna's remarks on globalization and Bhutan. "We have to take care that the young people are mindful of their being Bhutanese. They have to take the best of the future, but they have to keep their identity. Striking a balance will be difficult. The middle way would be best."

Her Majesty replied, beaming, "Yes! Because we love ourselves and we love our land."

She continued, "The whole world is looking to Bhutan because of the precept of Gross National Happiness given to us by our great king [the Fourth King], the handsomest king in the world -- until now! But we have to be careful because if it's over-marketed, people are going to be disappointed."

Not once during her time in the conference were there any cordons, security checks, or protocols. Only one. When she entered the room, we all rose to our feet. When she left the stage to sit in the audience on a chair covered in silks especially for her, we all stood up. Both times she graciously smiled and asked everybody to take their seats with a gesture of her hands, a small nod, and one word, "Please."