Bored on the 4th of July til 15th of March

February 11, 2010
(Un)Made by Walking
(wrote this for the catalogue of Kaw's Bored on the 4th of July one man show
in the Ateneo Art Gallery)
Kawayan de Guia arrived at the Omi International Arts Center in Ghent, New York spent from the journey from the Philippines, out of sync and empty-handed. The hosts at Omi drove him to Houston, the closest town from the Arts Center, to buy some materials for the work he would be doing as one of 30 artists from all over the world participating in a three week residency. They took him to Walmart.

Within five minutes of being in Walmart Kawayan was assailed by a wave of panic. In that inexplicable moment of terror, Kawayan decided that he should return to Walmart at his own pace, and on his own terms, to understand the way he felt about being there. On America’s Independence Day (Kawayan calls it, “America’s day to shine”) he set out at dawn and walked alone for six hours across 30 kilometers of Route 66 through a landscape he describes as, “Eerily empty. Forgotten.” On this walk, he met only one person, who spoke to him from his car. Nobody was walking, or cycling. Every one was contained within cars, GM trucks, their houses, their buildings, and looked out at the world from inside those interiors. Bored on the Fourth of July is the outcome of that walk.

For Kawayan, walking is a way of ingesting the world and digesting that which cannot yet be fully known. For him, it is only at the end of the walk that one comes to realize in one’s being the residue of the sensations gathered in that time of movement through space; movement defined by the point of departure, arrival at the chosen destination, and the route in between. But everything else about the art of walking, or walking art, is defined by what the artist chooses to attend to in the landscape, thereby reshaping the world through bipedal movement and an attentiveness to the landscape that can only be given when moving at human speed. The art is in the process, unfolding the way a road undulates from the point upon which one stands, and takes a step.

A Line Made by Walking by Richard Long
Image source: National Galleries of Scotland
In her history of walking, Rebecca Solnit points to the 1960’s as the time when the gesture of art became primary, the product of the gesture secondary, the latter being “a mere souvenir of that gesture which was now its subject.” Richard Long’s “A Line Made by Walking” (1967) is an early example of exactly that. It was a straight line in a grass field made by the artist walking back and forth but going nowhere. Long’s idea of making sculptures by walking is a reflection of the way in which the landscape is shaped by our movements and the effluence of our products, as well as by the actions of all beings and elements in that landscape. Long records or documents his work in maps, textworks, and a combination of photographs and text. He considers these pieces as “distillations of experience” that “feed the imagination." 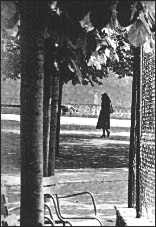 Similarly, the French artist Sophie Calle also works with a combination of movements involving walking, or following and being followed, and photographs. In her 1981 work entitled “La Filature” (The Shadow), Calle asked her mother to hire a detective to follow and photograph her as she went about her daily life in Paris. Calle knew the detective would be tracking her, but she did not know when he would be there. She also wrote down what she did and photographed what she saw each day. Her photographs and written itineraries and those of the detective’s were incorporated into an exhibit. La Filature and Calle’s other work evoke how an urban landscape is filled with encounters and interactions, as well as surveillance, curiosity, suspicion, and fictions of our own making.
(Photo from La Filature. Image source: DARE.) 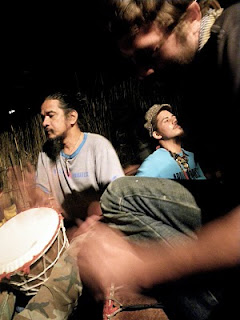 Closer to home, Kawayan’s walks may be traced to the movements of other Baguio–based artists such as Rene Aquitania who walked from Baguio to Manila shortly after Edsa 1 in 1986, picking up things he found along the highway and placing these in a kariton he was pushing upon which he had painted the words “Art for Peace”. Arduous pilgrimages draw blood from the devoted and Aquitania arrived at the Cultural Center of the Philippines with his hands and feet bleeding. Upon his arrival he unloaded his collection of things from the road and slept on the kariton. On this walk, this lakaran, Aquitania expressed his protest against the violence of war. Thus movement is the message, is protest, is walking.

Aside from belonging to this lineage of walking artists, Kawayan’s walks must also be linked to walking as part of everyday life in the Philippine Cordillera; walking as tradition, walking as essential, and not just as protest or pilgrimage. Before roads snaked through these mountains, people walked from the highlands to the lowlands to trade pigs, cloth, gold, tobacco, and other produce for salt, sugar and other prized commodities. Before cell phones and texting, messages were delivered on foot and face to face. Walking was and continues to be a vital form of making physical contact with the land and with people, and a quietly spiritual way of keeping those connections alive. 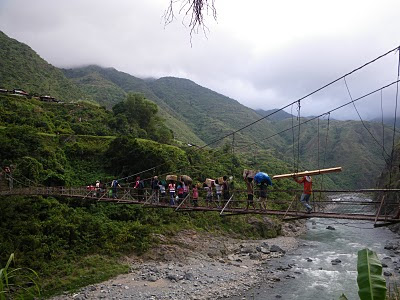 In 2006, Kawayan walked from Baguio City to Kibungan, Benguet on a search for the monkeys that disappeared when the forests were destroyed. The monkeys were the fiction upon which the two day walk unfolded, but the purpose of the fiction was to connect with the people that lived on the land and who were witnesses to the way that landscape had changed over time. In 2002, in Japan, Kawayan walked out in anger from an art event in which he felt separated from his peers. He walked 100 kilometers in a day and a half, from Fukuoka to Kitakyushu, Japan, stopping only twice, and walking through the night. It was winter then. In 2000, Aquitania and Kawayan walked together from Baguio to Sagada over a four day period, a journey after Erap’s impeachment that paralleled Aquitania’s Art for Peace and at the same time tightened the two artists’ friendship further.

In the juxtaposition of photographs and text that make up Bored on the Fourth of July, we are given the residue, the non-perishable goods, of Kawayan’s walk through one of America’s thousand capillaries and his grappling with the sense of being chained in by chain stores. The act of returning to Walmart on foot became a way of reapproaching the destination slowly. He wanted to experience the gradual transition from farmland to the urban center, to confront once again the shock of being surrounded by the evidence of America’s insatiable hunger and the people’s drive to consume material possessions. Kawayan’s moment of panic was a moment of realization. 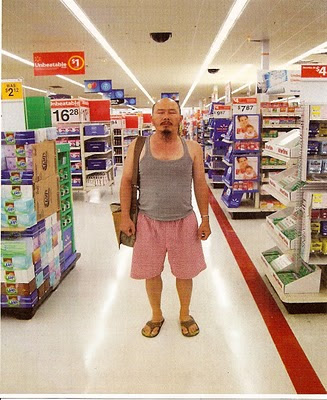 Photo by Kawayan de Guia, from Bored...
"It was me realizing I was in America. I was waking up in Walmart… Whether they like it or not [the people there] have no choice but to go to Walmart… They’re trapped by the system."

In two sets of images and text, Kawayan puts forward a critique and a commentary on the human propensity to consume, which he witnessed in America and rediscovered on his return home. It is a propensity, a hollow greed, that America projects on the world. In Kawayan’s eyes, the present human condition is unwell but thriving on the new drug that is shopping. The acts of buying and possessing have become people’s primary sources of fleeting, mass-produced moments of happiness and artificial healing.

The first set of images are photographs Kawayan took during his walk. Superimposed on these photographs of landscapes, buildings, and found objects, are well-rehearsed taglines of the big shots of the corporate world, the beacons of our everyday lives. The text superimposed on the photographs alludes to the the way America projects its culture of consumption and material affluence upon the world. The second set of images depicts people standing with their eyes closed in the aisles of supermarkets and shopping malls or in the tight spaces of small, local business establishments. These images speak of the human condition anywhere and everywhere. We are surrounded by products that we are driven to consume. Even here, at home, Walmart breathes down on us, and we buy, and we buy, and we buy.

"People can have everything they want and still be unhappy. It’s spiritual poverty. We’re so attached to things and things control us. We have to look within."

We may look within, or walk blindly through this world, not knowing who our neighbors are, nor what ails us. The false contentment of material possessions is so pervasive that we take it for granted, much the way we fail to see that in walking we are perpetually saving ourselves from falling flat on our faces. 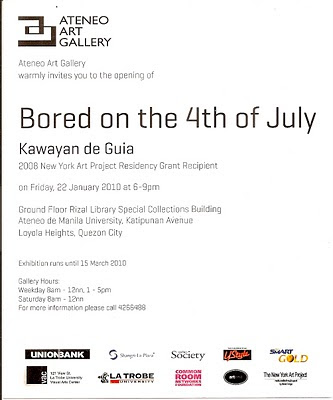