Going back to Indonesia

January 30, 2008
In my head, that is... It's time to get down to the nitty-gritty of my last chapter on Indonesia. I've been putting it off because, well, I don't know exactly. I get this feeling of dread every time I start.

Found this in my fieldnotes. Could be the reason why. This is almost full disclosure here folks, the unedited whines of a woman anthropologist in the field. This will never make it into my dissertation, that's for sure. And I hope it doesn't come back to haunt me but hey, I have a question: Why do anthropologists who claim to write reflexive anthropology never reveal the ugliest parts of their fieldnotes? Maybe I'll find out after sending this out into the world. This was written on one of the worst nights of my fieldwork. That's right, ONE of...

This is one of those nights when I barely have anything good to say, and so I have a lot to say. I can’t seem to live by the platitude, If you can’t say anything nice, then don’t say anything at all. I try though, I try.

Insects everywhere! In the air, in the kelambo, in my eyes, my nose, my mouth, my computer screen. This is driving me mad. It’s full moon. I wonder whether the insects are here because the moonlight has called them. They fly in thick swarms around the flourescent lights on the porches and in the dining room.

I’m being eaten by mosquitoes in this village. Eaten alive. This is driving me mad.

Four young policemen arrived from Sampit today. They’re here to monitor Kalimantan Tengah’s provincial elections for governor and vice-governor, which will take place tomorrow. Their appearance in the losmen this afternoon made me nervous: their armalites, their loud voices, their swagger, their macho talk. I didn’t want to sleep in the losmen. Fran, my research assistant, has assured me we would be ok – safer, in fact. I wonder whether she’s just naïve, or whether I’m just too paranoid and have lived with too many horror stories about the brashness, filth, and unscrupulous character of men in uniform, with guns. At least they’ve had the decency to leave their guns in their rooms since they first arrived. Of course, they never leave the guns unattended. Their loud voices outside, their offers to escort us around the village “for free”, their initial refusal to believe Fran and I have families already and therefore uninterested and unavailable – this is driving me mad. 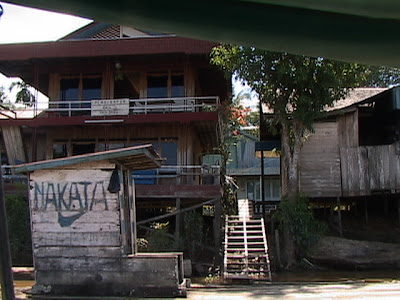 The heat and humidity here is relentless. Everything in my room stinks of unending dampness and sweat, with a hint of old sun-dried cat piss on the bed. This is driving me mad.

Almost every time we enter a house, we’re offered sickly sweet coffee or tea. Of course, we never refuse. The amount of sugar I consume each day is driving me mad, too.

Fran sometimes reminds me of the interpreter in Lost in Translation. People answer our questions with a string of words, gestures, facial expressions and what appears to me to be much generosity. Then she turns to me and gives me three or four monosyllabic words. This too, is driving me mad. Sometimes I’m able to grasp the gist of what they’re saying, or I catch a few words that are like clues to me, and then I have to insist that she help me put the clues together, or give more flesh to the bones I’m clinging too. Fran has an interviewer’s instincts, so I hope this situation will improve over time. I’m glad that she always turns to me to ask whether I understood. Despite this, we often don’t understand each other, but still, I have many reasons to feel optimistic about our teamwork.

While Fran went next door to bake a cake with Mama Hadi, I went out unto the porch barefoot and sat soundlessly on the edge, gazing at the moon. It was a pleasure to be alone, outside and yet concealed, even as two of the policemen downstairs filled the night air with their heavy Javanese accents and spoke as if the world was theirs to rule. I saw the moon suspended in thin clouds like the iris of an eye, encircled by rainbow-eyelashes. The sight reminded me that madness is a way of looking at the world and being in it that’s beyond the ordinary and the mundane. I shouldn’t let mosquitos, mistranslations, macho talk, and a rank mattress drive me up the wall.