March 17, 2007
PUERTO PRINCESA
Oh look! A garbage bin! (Yes, in Puerto Princesa they say bin. Is that British or Australian influence, I wonder.) And another! And another! Garbage bins everywhere! My gods, you can't go anywhere without seeing a garbage bin! Shucks, I have nothing to throw in them. Got a candy wrapper?

BAGUIO CITY
Hmmm, where do I dispose of my snotty tissue? In that old sack propped up against the signpost? No. In that black garbage bag disgorging its contents all over the sidewalk? No. Maybe on the next corner there's a trash can. (Yes, in Baguio we say trash can. Definitely American English. Sigh.) No. Try the next street corner. No? Ok, one more street corner. Nothing! Ok quick, drop it in the ditch while no one's looking! Wait, why bother trying to be discreet? Everybody's doing it! And we call ourselves Clean and Green. I have a new title for Baguio: The Ginnest and Grinnest City in Luzon. We drink gin and we grin. 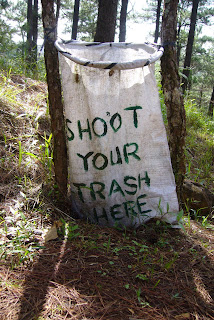 A brilliant comparative observation shared by my friend over at Cycling Monkeys. (He told me this a long time ago, so he may have even forgotten saying it, but I remember the truth the few times I hear it spoken):
In some first world countries, the insides of people's cars are full of trash, but the world outside their cars is clean. They'd rather dirty their cars than dirty the world. In the Philippines, the insides of people's cars are spotless. But look at the state of the streets they drive through! That's where the people with cars throw all their trash. How many times have you wished you could plow down a speeding souped up honda on the highway for thrusting a McDonalds styrofoam cup out the window? They are Fast, you are Furious.

(But then again, those people with filthy cars but clean streets in the first world should take a look at what their governments are doing to the rest of the world. There's much to be learned from comparisons.)