June 28, 2007
Last week (I told you I love old news), 21 mothers bared their painted breasts before the Supreme Court of the Philippines! Yehey!!! They were brave members of the Arugaan Foundation and Save the Babies Coalition. Galing! They bared their breasts to express their advocacy for breastfeeding and to protest the interference of pharmaceuticals and milk companies in the proper implementation of our Milk Code. Mabuhay!!! 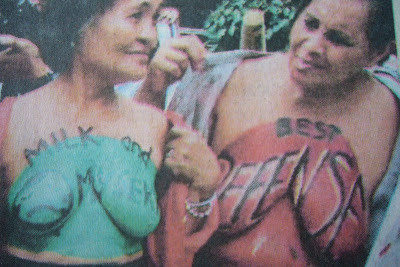 You've gotta love these mothers! I wish I could've joined them!
Taken from a photo by Rem Zamora, PDI frontpage, 20 June 2007
To sum it up, our Department of Health is finally doing the right thing by aggressively campaigning for breastfeeding, and prohibiting advertisements promoting formula milk for infants below two years of age. (Remember those ads with all those child prodigies who allegedly drank formula milk? I wonder what they're drinking now.) The Pharmaceutical and Health Care Association of the Philippines sued in court to put a stop to this. Wyeth, Mead Johnson, Abbot Laboratories are members of this association. Their lawyer (with an unfortunate Arroyo name association and an unworthy cause) stated before the Supreme Court that implementing the ban on advertisements would lead to about P10 billion in losses for the milk companies. The U.S. Chamber of Commerce says that these actions by the DoH threatens the image of the Philippines as a 'stable investment destination'. Bullshit!!! 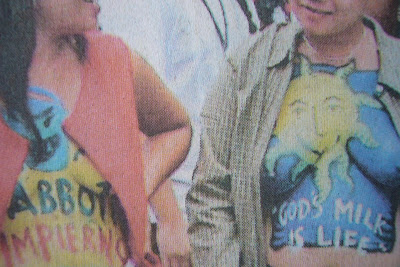 'Abbot impierno', as in 'hanggang hell', or 'abbot go to hell'? Heehee!
'God's milk is life' -- my favorite. This mother and I could have the same goddess.
Taken from a photo by Rem Zamora, PDI frontpage, 20 June 2007
While it's a pity that the individual daring mothers who did this remain nameless in the news, kudos should go to Judge Angelina Sandoval Gutierrez for pointedly asking why the milk companies were more concerned with loss of profits than the health of infants, when it has been proven time and again that breastmilk is best for babies. Hah!

You can read all about it here. This is not the first time that women have bared their breasts as an act of protest in the Philippines. Somewhere in the Cordillera about two decades ago, mothers, grandmothers and wives, formed a bare-breasted, human road block to prevent loggers/miners/dam builders/military (I don't remember the details, but anyway same difference, same criminals. Can any one fill in the memory blanks for me?) from entering their territory. Who says we're all a bunch of pale, limp-wristed Maria Clara's now, ha? Hoy, think again!

The Nashman said…
Monbiot wrote about this in his full page column in the guardian two weeks ago.