Cycling in the City

There’s a feeling of freedom that comes with cycling in a big city which is very important, as one can feel trapped by the routine of touring, work, or even travel.... Even if freedom is an illusion the physical sensation of riding does a pretty good job of making it seem attainable for a moment.
-- David Byrne

David Byrne writes about how things are looking up for commuters on bicycles in New York, having cycled in the city for over 30 years. Oh how I wish the same could be said for Baguio! I vaguely remember some years ago that the city of Baguio was given funds by something like the World Bank or the Asian Development Bank to create bicycle lanes thanks to some visionary council member! Needless to say, the lanes never materialized. And who knows what the visionary council member did with the funds.

Lucky David Byrne has cycled "for transport, not sport" in some of the world's greatest and worst cities, including Manila! Risking life and limb on a bicycle is sheer adrenalin, the stuff of life, the play between the work, and he knows it. He mentions Paris and Bogota as cycling friendly cities and is particularly happy about city streets that are given over to bicycles and pedestrians. I'd say Oxford and the Midlands are great examples too. When are the old hawks on Session Road and in City Hall ever going to see the light about the pleasures and benefits of walking and cycling streets? As it is, cycling on Session Road is illegal! But we do it anyway, because we believe we have a right to do so. You'll never see us double parking or clogging the damn street anyway, the way some SUVs and taxis do on a regular basis. 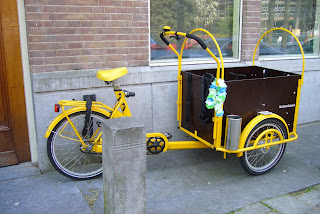 Family transport in Amsterdam.
We like the Netherlands because the whole country moves on bicycles. (And they have a policy of tolerance towards marijuana. Don't you think Amsterdam or Leiden would make a great model for Baguio?) Whatever the weather, and whatever the destination -- market, grocery, school, office, picnic, party, museum, lunch or dinner date -- the Dutch go on their bicycles, and so do their babies! The whole country is traversed by bike lanes, so that it's possible to cycle through cities, villages, farms, and polders without ever leaving a bike lane. Because of this, I can almost forgive the landscape for being so unrelentingly flat!

The number of cyclists you'll see in Baguio on any given dry day is on the rise. I wish I could confirm this observation of mine by spending a few days on the streets with one of those clickers that you click to count things. (I'll also need a clicker in the other hand to count the number of smoke-belching vehicles that go by.) I believe that soon there'll be enough of us to form a constituency with a voice, and then the streets will be ours!!! Mwahahahahahaaaaa! 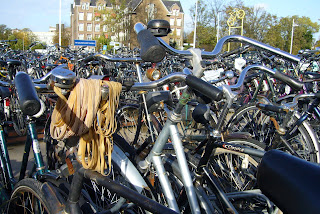 Parking outside the Leiden Central Station. Now picture a Baguio parking lot like this!

The Nashman said…
I learned how to pick a bicycle lock from a junkie in Amsterdam. It's all fair game. I think they own three bikes anyway and expect 2 to be stolen. Plus, you can always get a 'new' one for ten euros
20 June 2007 at 07:30

padma said…
Turuan mo naman ako! I think the average Dutch guy/gal in his/her 30's would have had at least 7 bikes stolen from them in their lifetime. Kaya pabor sila sa mga bulok na bisikleta. Less likely to get stolen, and if stolen then less likely to be sorely missed.
20 June 2007 at 09:20

Mayumi Masaya said…
lot of bikes here get stolen too. bike lanes are just ridiculous, i know of at least three friends who have gotten into accidents.

Anonymous said…
hi padma, the reason i've crossed over to running from cycling was the increase of motor vehicles in the city. it was no longer fun having to fend for oneself against these steel behemoths in the hands of some monsters.

baguio has become a city of and for motor vehicles by motor heads. kunwari, we celebrate earth day, we, kunwari, are concerned about global warming. but this are all just paying lip service.

Thanks for the visit! It's true, cycling in our city feels like being in a war sometimes. And it's true, our city is being developed for motor vehicles by people who own several cars each with airconditioning, so they never have to breathe the same polluted air that we do. PLUS, have you noticed how there are so few sidewalks throughout the city that are wide enough for the thousands of pedestrians that use them everyday?

Frustrating indeed, but we have to keep trying to do things differently! Our way! The bicycle way, or the running way! Baguio should be a city for athletes, don't you think? We already produce some of the best...