Ritual for all Occasions 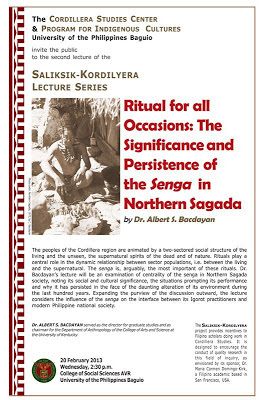 Attended a talk delivered by Dr. Albert Bacdayan, UP Baguio. Feb. 20, 2013. "Ritual for All Occasions: The significance and persistence of the 'Senga' in Northern Sagada."

The senga is a ritual in which at least one chicken and one pig -- sometimes more -- are sacrificed. The senga is usually performed for milestones such as the completion of a house, the opening of a new business, a wedding, a funeral, when someone is ill, when someone is leaving on a journey. He spoke of how Cordillerans have a ritual for almost every occasion or ailment. Indeed, the word he used was not ritual but "remedy."Dr. Bacdayan described this as a "healthy agnosticism."He mused that the abundance or such remedies and rituals is the reason there are rarely feelings of helplessness among Cordillerans.

He described ritual as a bundle of activities that assures people and anchors identity.

When one calls the old men and is the principal of a senga, you are perceived to be performing one's obligations, acknowledging your relations with the departed and with the community. The reward of holding the senga is not prestige or an increase in one's stature in the community. Rather, "the reward that you get is that you are regarded as a good person."

Dr. Bacdayan attributes the persistence of the senga to the value and respect that Igorots give to inheritance. The senga is a ritual that was handed down from Lumawig, son of Kabunyan. (And not to be confused with Jesus! As Dr. Bacdayan pointed out, although both Jesus and Lumawig were both revolutionaries who taught people new ways of seeing the world and being in it, they came down to earth in very different ways and also for different reasons.)

Contrary to popular belief about the decline of traditional rituals, Dr. Bacdayan observed that ritual is stronger now than it was in the past. He corroborates the work of Martin Lewis in Buguias, and the work of Villia Jefremovas and Joachim Voss, also in Sagada. As a Sagada-born Igorot who was once against the senga and urged his family to stop holding the ritual, but who now understands and appreciates it, Dr. Bacdayan is himself proof that "rituals are coming back in a stronger fashion."