June 27, 2007
ADVISORY: Interesting stuff on the production and negotiation of adat, or customary law, written in dry and boring prose. 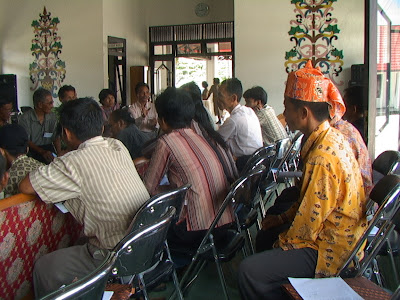 Diversity and difference within indigenous groups and among various peoples occupying the same territory was highlighted at a government-organized gathering of Dayak adat leaders in Central Kalimantan, in 2005. The purpose of this meeting was to come up with a compilation of Dayak customary laws that could be recognized and implemented throughout the District of Katingan, alongside local government rules and regulations. Leaders from my primary fieldsite of Baun Bango were in attendance. All of the participants ascribed to Dayak identity, and were in agreement with one another that all people living in the District of Katingan, or conducting business within it, should respect traditional Dayak laws and be subject to traditional Dayak sanctions and fines, regardless of indigenous identity and/or nationality. However, there were heated debates on the subject of sanctions and fines, a distinction between tradition and religion, and the determination of traditional boundaries.

There was a time in Ngaju Dayak history when slaves were taken. Often, slavery also served as a sanction on people who committed offences, or were unable to repay debts. Slaves were referred to as jipen (Scharer 1963). During the Adat consultative meeting held in 2005, discussions over traditional sanctions became explosive when the term jipen was brought up. There were those who wanted the word to be kept alive, in memory of the life ways of their ancestors, with the meaning of jipen changed from ‘slave’ to a fine with a fixed equivalent in Indonesian rupiahs. They wanted jipen fines to be imposed on environmentally destructive activities. Others, while agreeing to impose sanctions on environmental destruction, were strongly opposed to the idea of jipen. They preferred to forget about jipen and did not want the name of the Dayak to continue to be tainted with a ‘shameful’ history of slavery. Furthermore, they argued, modern Dayak society treated all people equally.

This angered the proponents of turning jipen into a fine, who countered that there was nothing shameful about this history and that there was nothing degrading about paying fines for one’s offences. Those who were more open to the idea of making jipen a fine argued that the amount to be paid should be flexible in accordance with the gravity of the offence committed, and also in consideration of the capacity of individuals of different income brackets to pay. The kinds of comments and discussions that were raised over this issue hint at the stratified and divided aspect of society among the Ngaju Dayak, past and present. This links to a more general question on who has the power to influence the shaping of indigenous traditions in a so-called modern world, who has the wherewithal to use these traditions to influence life within indigenous territories, and to see to it that even those who do not ascribe to them uphold traditions. Similar to the chain of bureaucratic accreditations set up by the IPRA and the NCIP in the Philippines, the Ngaju leaders in attendance at this meeting also drew up a set of guidelines of the establishment of adat councils throughout the district, and the selection of adat leaders.

In turn, the latter issue also opened up debates on the distinction between Dayak traditions and religion. There was much opposition between Muslim and Christian leaders on one side, and Kaharingan leaders on the other. The official recognition of the Ngaju Dayak religion as a branch of Hindu has given some political leverage to Ngaju leaders in Central Kalimantan, who take Kaharingan as a platform for Dayak sovereignty in Dayak territories (Schiller 1997). At the aforementioned meeting, Muslim and Christian leaders insisted that Kaharingan rituals should not be imposed on every one, because different Dayak ascribed to different religions and practices of spirituality. They insisted that customary laws should consist only of ‘cultural practices’ (budaya) that had nothing to do with deities or spirits. This debate on the selection and transformation of identity markers such as jipen, and the separation between tradition and religion, reveals once again the proliferation of social boundaries that are created through interactions. Through people’s engagement with one another’s conceptions of adat, limits are set to what is acceptable, what is to be adhered to, and who the adherents should be.

Interestingly, these leaders wanted to impose stringent fines on environmentally destructive practices. Many attested that this was to protect their villages from the encroachment of oil palm plantations. Others spoke of putting a stop to practices such as fishing with electricity, which benefitted only the practitioner and disadvantage many other fishers. Another form of protection that these leaders sought, was the clear delineation of village territories and traditional lands. Asdfafe otldfk wor pev llkjdjoerrnfasdeof ffbbjlofltteks!