June 04, 2007
They're BACK and the president bitch is coddling the fuckers; these subhuman, gun-wielding, power-hungry idiots responsible for disappearances (why do we call it 'salvaging'?), torture, and extrajudicial killings.

Or maybe the monsters never went away. I just wanted to believe that they did. 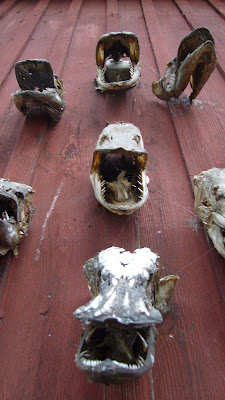 This came in the mail today:

> *Account of Pastor Berlin Guerrero of his abduction
> and torture by the
> military
> *
> *Statement of Pastor Guerrero
> *
> What does it take a government to have the nerve to
> abduct, torture, and
> terrorize my family on the
> basis of an old inciting to sedition case and a
> baseless murder charge?
>
> Far more absurd is the accusation that I am the
> Secretary of the CPP
> Provincial committee in Cavite.
> This lie that they tried to extract from me by means
> of physical, mental and
> psychological torture and
> projecting me in public as a "hand-gun and
> grenade-carrying rebel."
>
> I am a Pastor of the United Church of Christ in the
> Philippines (UCCP) and
> never participated in any
> killings, illegal or unlawful activities, or any
> common crime.
>
> My family and I have just taken a tricycle from the
> local church which I
> have served for two consecutive
> years (June 2006-2007) where we just celebrated
> UCCP's and the local
> church's 59th and 72nd anniversaries
> respectively.
>
> On May 27, at around 5:30 pm, a white van cut the
> tricycle's path and
> military-looking men quickly alighted
> to grab me; despite my plea that they show me the
> warrant they said they
> had. I was man-handled and
> forcefully shoved inside the van, put a handcuff on
> my hands behind me,
> covered my head with a cloth and
> packing tape, was beaten, punched and kicked
> repeatedly.
>
> They brought me to a place I didn't know. Here,
> still handcuffed, men would
> take turn interrogating and
> beating my head with their fists and blunt objects
> (like a 1,000 ml mineral
> bottle and other objects). All throughout,
> layers of plastic bags covered my head. My torturers
> would tighten the bag
> until I could no longer breathe. I passed
> out two times and urinated in my pants.
>
> They made me shake my head for about an hour and
> beat me whenever I stopped
> they said they would do these
> things to my family if I did not cooperate. I was
> forced to give names and
> addresses of my whole family, officers of
> church and conferences, name of my administrator at
> Union Theological
> Seminary where I am studying theology,
> leaders of progressive labour and peasant
> organizations in Southern Tagalog.
>
> They opened my computer by forcing me to give the
> password, got my e-mail
> password. They erased all of my church,
> school and personal files and replaced these with
> documents that belong to
> the so-called underground left.
>
> After about twelve hours, they put me back on the
> van still handcuffed and
> blindfolded. They threatened to kill me, burn
> me or bury me. They continued to beat me and make
> new names for me. They got
> my sim card.
>
> They called me Pastor-Impostor, and lectured me on
> the "evils" of communism
> and how the church, legal people's
> organizations are "used" to create trouble by
> criticizing the government.
>
> When the van stopped, it took an hour before they
> led me down, made me sit
> down and lie down. After an hour, they
> removed my blindfold. Here I learned I was in Imus,
> Cavite specifically at
> Camp Pantaleon Garcia, Cavite Provincial
> Police Office (PPO).
>
> Later on in the afternoon, that was the only time I
> saw the warrants of
> arrest and to what unit of the PNP I was turned over
> to by my abductors.
>
> Now that I have the time to collect my thoughts, and
> view my situation
> inside what police officers call a "subhuman" cell,
> let me make a
> preliminary analysis of my unfinished ordeal.
>
> (1) The unit which abducted me is an organized AFP
> unit which operates
> covertly or below the law. It is composed of
> elements coming from different units of AFP's
> Intelligence community. As
> a counter-insurgency unit, it uses ex-NPAs.
> They are lawless enforcers.
>
> (2) Making use of court cases which involves
> suspected personalities of the
> left, no matter how weak, these cases may be
> served and used to make the arrest legitimate. In my
> case, I am implicated
> in a Murder Case in 1990. Case files show that I
> do not have a direct or indirect link to the crime.
>
> (3) To bring me to the court by means of the arrest
> warrants is secondary.
> Their primary objective is to extract information
> from me by means of torture.
>
> (4) It is also meant to terrorize my family, my
> relatives, friends, church
> members and practically everyone I know and who know
> me. It
> creates a thinking that this repeated attack on a
> person's right, which may
> end in incarceration or death, can happen to
> anybody.
>
> I am outraged by their branding me as a
> "Pastor-Impostor" because it is an
> affront to the sacred office I have sworn to serve
> God Almighty who knows
> every heart and mind.
>
> Finally, I hold the Gloria Macapagal Arroyo
> government responsible for the
> abduction and torture I have suffered and the
> subhuman captivity I am forced
> to accept. The GMA Administration should listen to
> the repeated cries of the
> people to stop violation of human rights and the
> political killings.
>
> They may have put in jail, but my spirit is free and
> firm because God is
> with us always.
>
>
> (SGD.) PASTOR BERLIN V. GUERRERO
>
> United Church of Christ in the Philippines
> Inside the Camp Pantaleon Garcia
> Cavite Provincial Police Office
> Imus, Cavite
> May 30, 2007