June 03, 2007
She was weeping, and drenched from head to foot. Her clothes were dripping and she was covered in mud from the waist down. She wailed as she staggered down Kisad Road, lurching from side to side as though she might fall over with every wavering step.

I had seen her before. She was Lover Boy's most recent woman. Last year she was with child. With some regularity I would spot her and Lover Boy seated on a sidewalk, oblivious to the world rushing past. They would sit so close to one another, their heads touching, their hands unrelentingly stroking each other's backs. Sometimes, I passed close enough to smell them, the acridity of dried piss and moments spent rummaging through garbage bins for scraps of food. 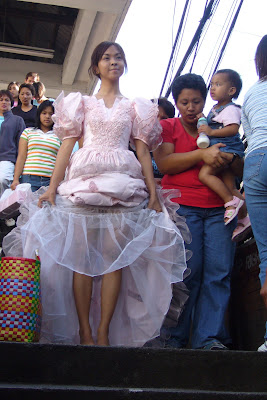 Now you see her...
(Japanese performer at the Performing Arts Festival held in BAguio in April 2007)
Last year, before her womb became swollen, there was another woman with them. She was young and just as bedraggled, just as blithely incognisant of the rat race being run past them. They made quite a threesome. Everywhere they went, they were smiling. They held hands, shoulders touching, or, almost always, their hands were busily traveling up and down the lengths of their backs broadened by layers of filthy clothes. Then the young one disappeared, like the others before her. Since Lover Boy appeared on the vagrant scene, I have seen him with two other pregnant women. Once, BFF says Lover Boy took up with a man and they would jack each other off in plain view on Session Road. Every one saw them, but no one paid heed. That's how it is. Sometimes I wonder whether maybe Lover Boy really does live the good life. But what happened to his babies? What happened to all his women, when they parted ways?

This woman I was watching as she went barreling down Kisad Road in all her dramatic splendor, what happened to her pregnancy? What happened to her life with Lover Boy? The last two times I saw him, he was alone and he had a hunger about him. What happened to her today? I was burning to know. I wanted to know: Was she hurt? Did some one do this to her? Where is she going? Will she be alright? Could I do anything to make her stop crying? Give her the shirt off my back?

I said nothing as I sat in the passenger's seat, twisting and craning my neck to watch her as she and I veered in opposite directions. We drove around a bend and there was nothing more of her to see. Facing forward again, I fished my mobile phone out of my bag, and tapped out a message accepting a dinner invitation. 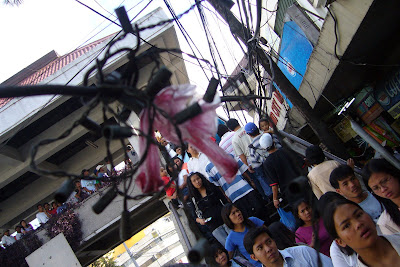 ... now you don't.
So it's true that people build walls around themselves. This one was a white picket fence, and if I should so happen to look that woman in the eye some day, she would see it in me. Immediately. But we never look them in the eye, these people. We stare at our shoes, or gaze into the sky, or look right through them and we pretend nonchalance as we fervently pray that they will go away, and that we will go unnoticed, which is to say, they remain in their worlds, and we remain in ours.

***
The Same Inside
by Anna Swir

Walking to your place for a love feast
I saw at a street corner
an old beggar woman.

I took her hand,
kissed her delicate cheek,
we talked, she was
the same inside as I am,
from the same kind.
I sensed this instantly
as a dog knows by scent
another dog.

I gave her money,
I could not part from her.
After all, one needs
someone who is close.

And then I no longer knew
why I was walking to your place.

(Translated from the Polish by Czeslaw Milosz and Leonard Nathan. Taken from 'A Book of Luminous Things, edited by Milosz.) 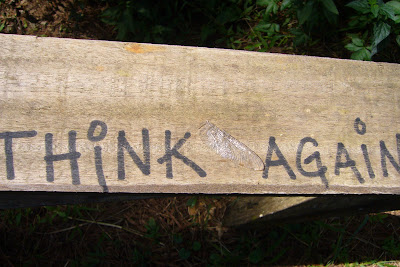 A message from the other side

Mayumi Masaya said…
i really like milosz. the poem goes so well with what you wrote.

padma said…
Thanks! You probably have seen Lover Boy. He used to go up to Kawayan and rub his back too when he saw him. Kaw swears it once lifted him out of a dark moment.
4 June 2007 at 20:22