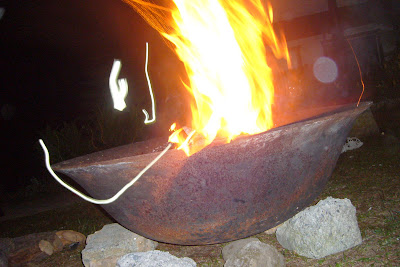 Our Mayor, Peter Rey Bautista, was sworn in last week. To my knowledge, one of the first things he did between his election and his induction was to attend a bonfire.

On the day of the bonfire, I was cutting across the Burnham Park football field to meet up with a friend in Solibao. I stopped short in my tracks when I saw, right in front of the Melvin Jones Grand Stand, a pile of blocks of marijuana high enough and wide enough to fill a fireplace. Next to it was a giant, black silyasi. A couple of cops were standing guard a few meters away from the stack of marijuana. They looked a bit too relaxed for this tour of duty. On the Grand Stand were Peter Rey, a handful of government officials looking important in their uniforms, and about 30 high school kids looking a bit lost in their uniforms. A banner stretched across the Grand Stand had some slogan on the Evils of Drugs painted on it in loud red. The high school kids were there with their entries to this anti-drug poster-making competition. Some of the posters were quite imaginative.

After the awarding of the best posters, the emcee called on "our beloved mayor" to begin the "Ceremonial Burning". At this point, Peter Rey descended from the stage, approached the silyasi that now contained the marijuana, doused it with gasoline and set flame to it with a torch, just like in the Olympics!

And then. And then, the high school children were called on to "spear the drugs" with their own flaming torches. Hacking and coughing and gagging, they obediently did as they were told, and after much picture-taking (but nothing appeared in the Midland!) they were allowed to go. They headed back to their schools befuddled and nauseated from that awful cocktail of gasoline and marijuana fumes.

What a stupid, stupid thing to do. They would've all felt better without the gasoline.

Anonymous said…
bwahahaha. even with peter rey as mayor, there are still eggheads who come up with marijuana bonfires. what next? ceremonial breakfasts with marijuana pancakes?
2 August 2007 at 14:52