Palengkera: Kapihan with the media! 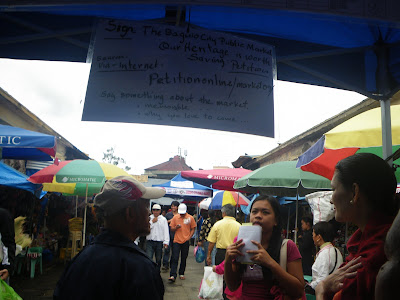 Since the March 2 fire there have been debates, consultations and "consultations," a market summit, a resolution for inquiry in aid of legislation in the House, council meetings and "council" meetings, and various news stories on the market.

The city government has finally approved a budget for a temporary roof to be built over the burned areas namely, the fruit and vegetable section, the tobacco section, and the sari-sari section.

Meantime, the court case against the Uniwide contract has been raised to the Court of Appeals. This issue still looms large over Baguio's market, as our city officials such as Mayor Bautista, Councilor Tabanda, and Councilor Sembrano have explictly stated that we can only think about short-term solutions for the market because in the end it will go to Uniwide. We wonder why they can say this so assuredly. Or are they afraid to say otherwise?

The Kapihan panelists include representatives of the market vendors. City Engr. Flores has been invited to present the PHP25M (or is it PHP16?) plan for the new temporary roofing of the burned areas. City Engr. Bannes or Architect Degay might come in his place. City Administrator Atty. Fianza was invited to explain the step-by-step process of bidding for government infrastructure projects, but he declined due to a prior commitment. Instead, an engineer from the Concerned Citizens of Abra for Good Government (CCAGG) will come to inform the public on the bidding process and how vendors and other stakeholders and citizens can monitor this all the way up to implementation. Former mayor Yaranon will tell the public why the amended Uniwide contract is flawed and he will explain the glaring illegalities in the said contract.

The Kapihan will be held in the vegetable or rice section of the public market, depending on the weather. Coffee, camote, and gabi will be served. Come and hear what people say, or have your say, too!

dissinea said…
I'll try to rearrange my sched so I can be there. Crossing my fingers. Thanks Padma. We still have to meet up for our writing date pala. :)
4 June 2009 at 17:15

padma said…
Would be nice to see you there Jenny!