March 09, 2009
Wheeee! This blog turns two today! I didn't bother to announce our first anniversary because I don't believe in celebrating personal anniversaries. There are better milestones to celebrate, such as personal victories. (Although admittedly, for some, two people staying together for a long period of time could be a personal victory of sorts. Ok, I concede that much.) Also, I didn't know where this was headed, which now strikes me as silly. Why should that have mattered to a self-professed now/here no/where woman? Pff! And for the record, I still don't know where this is going.

But since keeping a blog alive is a personal victory for little ole scatter-brained, undisciplined, "this-takes-too-much-effort", but "let's-spread-ourselves-a-little-more-thinly" Me), I've decided to symbolically gift my blog with two, lovely carabaos. 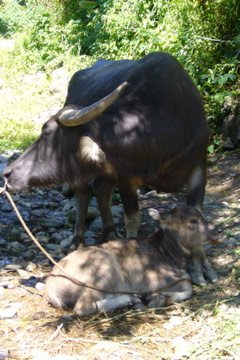 (Because I love carabaos. I also just love the sound of their scientific name: Bobalus bobalis. It has a nice ring to it, don't you think? It sounds so... happy! So... self-assured! As opposed to... nevermind!)

Also, it's nice to know that I've merited some new attention from writers in the blogosphere! Thanky, Ian, The Spy in the Sandwich [that] Eats the Sun. And special mentions from new bloggers too! Thanky, Pandora. (See their latest posts in my Center for Procrastination, right column.)

Finally, since I'm being self-indulgent already, here are my favorite posts from my first month of blogging as the now/here no/where woman:

The art of falling with love.

I also wrote my first two (and so far the only two) pseudonymous portraits in March 2007. Romannce and Manang Precious. I hope I manage to write more of these soon.