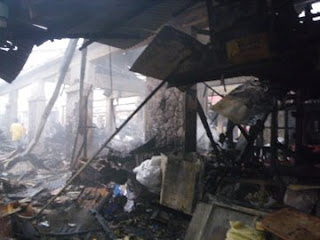 Much of my beloved market route now lies in ruin.

Many of my sukis' stalls burned down today: the manang from whom I buy sweet mangoes so tiny that the only way to eat them is with your hands and lips working at the precious flesh; manang Lilian and her family from whom my family and I have been buying shitake, juicy red tomatoes, goose-liver sausages, marble potatoes, special tofu, and other fine vegetables for three generations now; the manangs and manongs from whom I buy okra, squash flowers, malunggay, kangkong, camote, garlic, and onions across from the tobacco sellers; the calm and always busy manangs seated down low among sacks of fresh herbs, from whom I buy lovely-smelling basil and mint, and also pungent chives and wansoy; the manangs and manongs from whom I buy wonderful varieties of bananas; the families from whom I buy strawberries, persimmons, avocados, chicos, oranges, and passion fruit, depending on the season. All their stalls and stock up in smoke in a matter of hours.

Some say the fire was caused by faulty wiring. Others believe there's foul play behind the flames. Looking at the almost neat lines along which the fire raged, and how this section that burned is right next to the section that burned down last year, it's difficult not to jump to conclusions about arson and it's even harder not to think about all the politicians and corporate entities who have had designs on the market (such as privatization) over the past couple of decades at least. And then there's the question of accountability, if not culpability...

At the end of today's work I headed down to the market. I had been anxious to go all day. Silly as it may seem, I had this strong urge to hug my sukis if I were to see them, especially Manang Lilian who I have known since my first ever trips to the market as a whining little brat clinging to my mother's hand. Today I felt like I was going to a wake, although no one died or was injured in the fire. 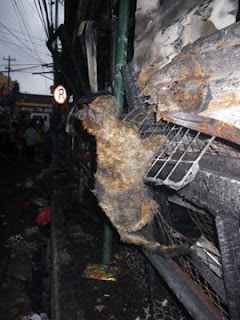 (Except for this cat, any maybe a few other four-legged creatures.)

The market was as crowded and busy as ever, except for the vegetable section, which was still smoking. People were picking through the debris, recovering what they could. 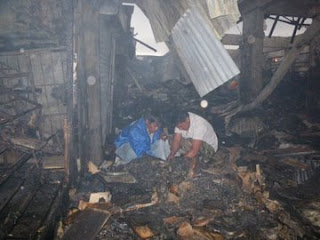 Two men were retrieving tuyo from the ashes. 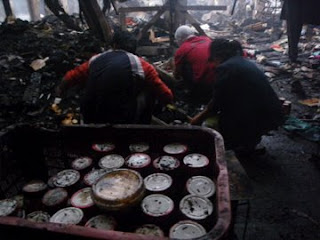 Some were picking up bottles of jam that were intact but blackened and putting them into crates. 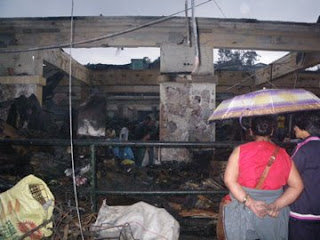 Deeper in the ruins, men and women were attempting to clean up the mess. 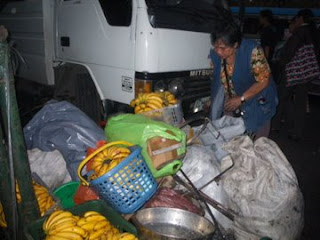 I found one of my sukis for bananas on the sidewalk, her hands blackened with ash, her eyes slightly swollen 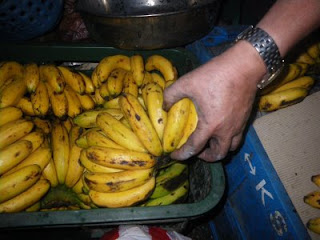 She was able to rescue a few bundles of bananas from her stall. I bought one miraculous bunch from her. Even then, she was still doing business. One has to, she said to me. The vendors plan to work to clean up the area themselves and aim to get back to business as soon as possible. They will not wait for empty promises.

I feel sad, angry, and full of regret -- regret for all the pictures I wanted to take but didn't, regret for all the wonderful things I wanted to write about but didn't, regret as though there was anything I could have done to save something I love so much. I will wait for the market to rise from the ashes, and when it does, I want it to be the market I know and love, with the faces I have come to know, and their vast networks and decades of ties among families, entrepreneurs, farmers, vendors, and sukis. The Baguio Public Market may well be the last place where community as we once knew it can continue to thrive. 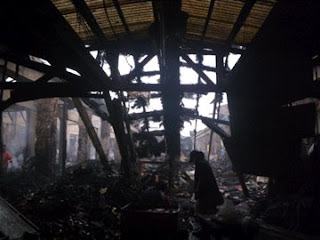 Anonymous said…
This fills me with sadness and nostalgia, for the time I spent remembering all the particular favorite stalls I found as well, in my short forays. from the particular flower vendor that you introduced to me, to the passionfruit and blueberry and strange cherry seller, to the ifugao basket makers that your nanay brought me to see. Be brave, press on and write write write. Set up stake against oblivion and denial. If this is foul play, then those corrupt people will get their due somehow. The brave will press on.

Anonymous said…
What? The market burned? I had just written a couple of articles about Baguio and one of them was about the market. In that article I said that the market was one of the very few places in Baguio that still felt like home. I feel so devastated. Did Garcia's coffee place burn down too?

Unknown said…
Pads, can you waylay Luisa to read this kasi I still ahven't written anything and she desperately wanted to know
3 March 2009 at 19:23

Anonymous said…
Its been almost 20 years since I left Baguio and its a shame that the vital part of the city is in ashes. I remember going there with our manang to buy walis, strawberry jams, avocados and vegetables. I hope that they get to rebuild it once again and have the hustle and bustle of the market open for business. Thanks for posting.

padma said…
Cor Tristesse, thanks for sharing your market memories and market love. I wonder whether our proclamations of love for the market could make a dent in the thick skulls of certain people who seem to think it fitting to dispose of the old charm and build some spanking modern edifice. We all know what that means.
4 March 2009 at 20:39

padma said…
Hi Pandora. The Garcia's coffee shop is intact, don't worry! The fire stopped just before it reached the precious bigas section. Please post another reply here with a link to your piece on the Baguio market! We need to say loud and clear how much this place means to us.
4 March 2009 at 20:41

padma said…
Arlene! Thank you for dropping me a note here! It's been more than 20 years?!? The market will continue to thrive! The question is, how will it be different?
4 March 2009 at 20:43

I don't quite know how to do the link thing from your blog but check out pandoraspace.com tomorrow. I will be posting the articles on the Baguio I Remember in the next few days. I have a post on the Market and the Cafe.

I want to write more things about Baguio but I am still trying to collect old pictures.