November 23, 2007
One of the most memorable things I ever saw in Jakarta was a bus with a condom ad emblazoned all over it's side. In bright pink, green, and yellow letters it promised pleasure and variety in its line of different shapes and flavors of rubbers. (Nash, don't chastise me. I know rubbers are erasers in Oxford.) On this particular bus, the highlight of the ad was The Durian Condom. A giant durian was painted on its rear end. I couldn't figure out from the ad whether it was a durian-spiked condom, a durian-flavored condom, or both, and whether the condoms were available on that bus line. Much to my disappointment, the durian condom was out of stock in every drugstore, grocery, and warung in which I looked and asked. It is either extremely popular, or a total myth, or I was hallucinating. By the way, unlike the Peelipins, where we are still sooo 19th century about sex, Indonesia has a policy of two-children-only per family and this is kept in place by the easy availability of birth control. But let's not get into issues of morality and religion here; I'm all for alternative positions, er, approaches to the issue. 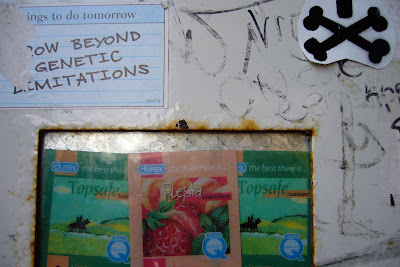 Condom vending machine in the Netherlands. I love the note in the upper left hand corner.
On that note, I am pleased to announce that the Baguio Writers Group is keeping abreast with the 21st century and along with Ubbog (a group of young Cordillera writers), we will hold a poetry reading on safe sex on December 1 at 9:30 p.m. at Rumours Bar on Session Road, Baguio City. The event marks International AIDS Day. Entitled "Ribbed, Dotted or Strawberry," the reading features 10 poets who will celebrate sex and romance without life-changing results like pregnancy and STD. Open-mic reading follows. The sponsors are Rumours, Philippine NGO Council on Health, Population and Welfare, and DKT Philippines.

Frenzy condoms will be distributed. These may come in handy after curtain call.


This also gives me the opportunity to dredge up my most popular and most reviled post, here.