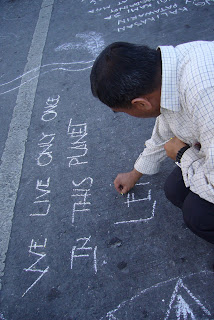 In this week's issue of the Baguio Midland Courier:

"The air quality in the city's central business district based on the Total Suspended Particulates parameter was recorded as 'fair' from January to April this year, reports from the Environmental Management Bureau of the Department of Environment and Natural Resources indicate.

"TSP concentrations ranged from 110-208ug/Ncm, which are within tolerable limit set at 230ug/Ncm as prescribed in the Philippine Clean Air Act (RA 8749)....

"The TSP is measured once a week on a 24-hour sampling duration using a High Volume Sampler stationed at the foot of Session Road.

"Suspended particulates are extremely fine particles of matter that are suspended in the air in either solid or liquid form, which have adverse impacts on the health of the public."

Thus, with a wave of the magic wand of Science, the DENR would have us believe that it doesn't matter that spending an hour on Session Road can make you feel sick and it doesn't matter that exhaust pipes are perfectly aimed so that their black fumes are emitted at exactly the face level of little kids, and it doesn't matter that the stench is enough to make you gag. Quality of life doesn't matter because the Total Suspended Particulates we inhale remains at "tolerable" levels. Now the polluter politicians sitting in city hall can pat each other on the back and say, See it's NOT true that Baguio is one of the most polluted cities in the world!

And what are we going to do about it? Science is good, science is great, but we have to be skeptical about who is using it to convince us of what. For example, the sampling is done at the foot of Session Road. Who are they kidding? Why not in the middle of Session Road, where vehicles struggling to climb the hill shift to low gear, rev their engines, and emit the most fumes? And so they did their sampling once a week for four months. That's 16 weeks of tolerable levels of TSP, out of 52 weeks a year. What have they got to crow about? And on which day of the week do they check? On the days of the week when the traffic flow through town is thick? Or on the days of the week when the traffic flow is low? Shouldn't we be questioning this LOUDLY, and make heard our clamour for a breath of fresh air? But no, we're just going to sit back and breathe deeply because we have been dazzled into complacency. But hey, where's that well-loved scent of Benguet pine? It's in a CFC-loaded can of Lysol, available at your local supermarket. Inhale... Exhale... Expire. 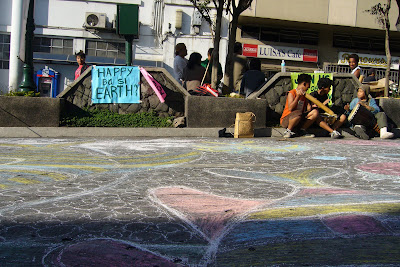 Session Road was closed to traffic last Sunday. It was merely the incumbent city officials' token concession to World Earth Day, but children of Baguio took the opportunity to make Session Road alive and festive with their colorful chalk drawings. Among placards that read, 'Let Session Road Breathe,' we found this blatant question.