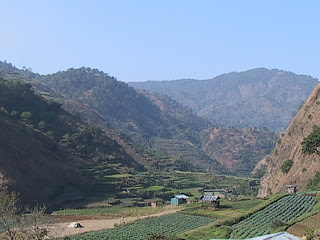 Ahem. Brace yourself for a dose of academic blather.

Boundaries do not exist in and of themselves in the world. For instance, a stream running between the territories of two Kalanguya villages in Benguet is not a boundary in and of itself. Rather, it is designated, recognized, and maintained as such by the Kalanguya who live by it. Boundaries are purposively made by people to separate themselves or to separate matter or certain objects from the rest of the environment (Barth 2000). In the dynamic of environmental action, boundaries are ubiquitous. Protected areas are delineated and zoned, objectives are placed within time-frames, stakeholders are identified and categorized, nature is recreated as “natural resources”, livelihood practices are classified as sustainable/unsustainable and legal/illegal. Intertwined with this is the indigenous peoples’ movement and its goals of recognition of their rights to land by virtue of their identities and their histories. Thus, boundaries of inclusion and exclusion are also drawn around who qualifies as indigenous, and who does not. The nation-state, as a geographical and bureaucratic entity, also exists by virtue of boundaries. In government programs, “bounded categories of beneficiaries” (Barth 2000: 29) are identified and actors are expected to fit into these to qualify. By far the most common (and yet the least explicit) in the dynamic of environmental action, is the boundary that is drawn between humans and Nature. The boundaries with which I am concerned in this study are the boundaries of places (parks, property, villages, nations), boundaries of time (seasons, work-time, project cycles, the future), and social boundaries (boundaries of relationships, interactions, behavior and positionalities). Apart from the boundaries I myself conceptually draw between the actor-groups in this study, I consider social, physical, and temporal boundaries as they are created and lived by actors themselves. Blablablablabla!