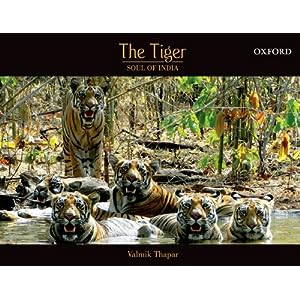 I have never heard someone speak about any living creature with as much passion as Valmik Thapar when he speaks about tigers. You can see for yourself below. Listening to him at the Mountain Echoes Literary Festival I got the feeling that he could be speaking about something as mundane as plastic forks and he still would have held his audience in rapt attention.

The full show can be seen here. The host, Sunil Sethi, was also present at the literary festival. His literary tv show, Just Books, is a great success in India. He recently launched a book on the tv interviews he has had with well known authors.

Valmik Thapar first saw a tiger in the wild in Ranthambore, "where tigers live in the ruins of ancient palaces." Since then he has dedicated his life to the conservation of the tiger in India. He stated earnestly (and angrily) that while Bhutan has Gross National Happiness India is experiencing the effects of Gross National Horrors, especially in terms of the decline of forests and the slaughter of wildlife, thanks to the work of "the buffoons in power." Sounds familiar.

When a young Bhutanese man in the audience asked him what Bhutan should do to protect the tigers that live in their forests, Valmik said, "Keep your wildlife invisible."

As the discussion became more and more impassioned, Valmik had to qualify his stance:

"Human rights activists hate me. They think I hate people. I love people! I originally graduated from sociology!"

Well. I graduated from anthropology and I love tigers. In my childhood I used to fantasize about befriending tigers and walking with them through the jungle. Once I touched a tiger in a park in Thailand. It was stunningly beautiful in a very intimidating way, even if it was in chains. I would love to see a healthy tiger in the wild some day.