November Light in May

May 28, 2011
"9.8.2031/12:30 pm/66℉ read the signboard at Chunzom.
Beep!!! The alarm on the gate rang as the bus passed by the laser lights."
So begins the short story Yellow Behind the Numbers, which is quite possibly the first ever piece of Bhutanese science fiction by Sippy Das. The story appears in the book November Light, an anthology of creative writing "produced by the 2010 cohort of students on the course English 202 module ('Creative Writing: Fiction and Non-Fiction') at the Royal Thimph College, Bhutan." 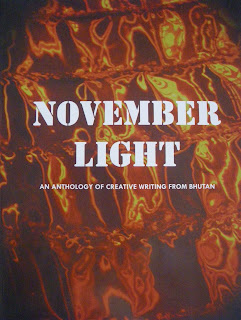 What is remarkable about this collection is that "English 202" is the first, and so far the only, university-level creative writing course in Bhutan. And so to read November Light is to look into the psyche of young Bhutanese minds that are discovering “the joys of creative expression – reading, writing, being read – as a way of making meaning,” as put by their young professor, Dr. Nitasha Kaul, a Kashmiri woman who has done extensive research on the history and politics of Bhutan. Her novel Residue was shortlisted for the 2009 Man Asian Literary Prize.
Reading November Light is also like tilting the camera at an odd angle and looking at a snapshot of Bhutan taken sideways. Typically, written pieces on Bhutan tend to gush about Gross National Happiness (with good reason), her natural beauty (also with good reason), and Buddhist spirituality (thus the GNH). Nitasha writes in her introduction about how these young authors have grown up in these so-called ‘exotic’ surroundings and instead turned their attention to themes that matter to them and that are part of their everyday lives: new media, love of country, romantic love, the first day of menstruation, archery, friendship, families, betrayal and personal memories.
Ugyen, one of the editors spoke about the creative writing class in Mountain Echoes. He joked that when the class began, they all wrote about love. Later on, they experimented in free form writing and they still wrote about love. Much later in the course, they learned “that there are many things in this world that we can write about.”
Sippy said with confidence, “Now I will never stop writing. Only if I die will I stop writing. And I will die if I can’t write anymore.”
Palden, another editor declared cheekily, “I am immortal. When I die, people will read my work… I hope!”
Ubbog, the young Cordillera writers group was very much on my mind throughout the session. I couldn’t help but draw the parallels between the late nights and hard work that they put into the first, handmade issue of the Ubbog literary journal, and what these Bhutanese students did to bring their work into November Light. I could very easily imagine any of the members of Ubbog playing the pivotal role of creative writing teacher for young people across the Cordilleras, much the same way Nitasha has done with English 202 in the Royal Thimphu College. I got carried away and began to imagine a flurry of emails and exchanges in creative letter writing between Ubbog, Nitasha, and the editors of November Light. It’s not entirely impossible. Who knows what might come of an encounter between the spring of youthful writing in the Philippine Cordilleras, and the Himalayan light of a young Bhutanese November?