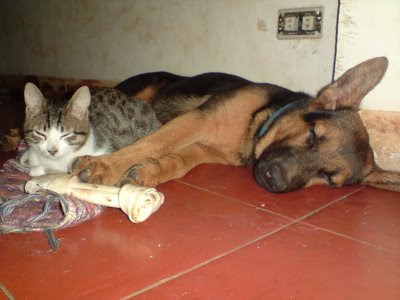 I admit: this series of updates isn't really about the whole zoo that I keep. It's mainly about Whisky and how he gets along with the dogs. He likes to play favorites. For the longest time, his best buddy was Carbo. You saw the ear grooming heirarchy in Week 8. This week, Sambal is his number one pet. (I dunno, did he maybe lose respect for Carbo when the latter was fixed? Little does Whisky know, he's next in line!) I try to be fair with all three animals but there's no use denying it, Whisky is the King as far as I'm concerned. Sambal and Carbo are several rungs lower. They're just cute mignons. Er, minions, that is to say.

The Nashman said…
you do know eventually that your household schedule will revolve around the cat don't you? there are only 5 of us in the household, (mother, father, me, cat, dog) and it's the cat who gets top priority. (wait, 6 pala kami. I have an adopted sister, but she's adopted so she doesn't really count...0
22 August 2008 at 14:49

padma said…
I kind of figured that out. Buti pa ang dogs, tinuturing nyang pets. E kaming mga humans, we're furniture as far as he's concerned. And if we don't feed him when he's hungry, we're dirt.
22 August 2008 at 16:35