Once more, with feeling

January 26, 2008
Wrote a review of Baguio Then & Now. I like the exhibit so much that this is the third time I'm blogging about it! It's been a while since Baguio's seen this much intelligence and substance poured into a bunch of photos put up on a wall. Here is a short version of my review. If you've got time to spare and can bear with my wordy gushing, read on... (The funny thing is, I'm actually starting to like the short version better than this one. Yawn.)

AND, the show is on view in SM Baguio until third week of February. Go see if you haven't yet. Kulit no? 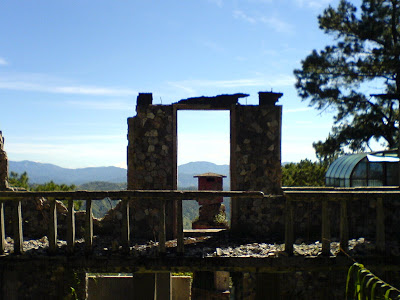 Viewing Baguio’s Heritage (or what’s left of it)

Have you ever unearthed a shoebox full of old photographs of a loved one and spent an afternoon marveling at how they have physically changed over the years and become the body and the person that you know and love today? Viewing the Baguio Then/Now exhibit feels just like that, except for two strange effects. First, unlike a person who naturally ages over time, Baguio seems to become newer as she grows older. Also, the exhibit stirs up a confusion of nostalgic emotions and maddening questions. Certainly there are many things about Baguio that her citizens can be proud of today and yet the present Baguio seems to be a sad likeness of an almost mythical golden age that many will remember from childhood.

The exhibit features photos of Baguio from about a hundred years ago, when the city was a newly opened town site. These are remarkable photos not only because of the visual record they offer, but also because they come from important archival sources such as the U.S. National Archives and Records Administration, the University Of Michigan Museum of Anthropology, and the American Historical Collection. Some of the images also come from the valuable private collections of eminent culturati such as National Artist Ben Cabrera and Jonathan Best. These old images are juxtaposed with photos of Baguio taken between the years 2000 and 2007 by Baguio photographers: Robbie Casas, Elicon Consul, Caesar Paul Garcia, JT Gonzales, Rudy Furuya, Tommy Hafalla, Ric Maniquis, Julius Mendoza, Mark Perez, Rudi Tabora, Ompong Tan, and Boy Yñiguez. Using re-photography, a method first used in early environmental studies, curator Erlyn Ruth Alcantara has placed side-by-side old and new photographs of Baguio taken from similar angles and vantage points.

Most striking of the photos are the aerials, which show how the landscape of Baguio has been transformed over a century from a carpet of green dotted with small buildings to a teeming mass of billboards and concrete structures rubbing shoulders and jostling for space. As a collection the photos give us a perspective that we don't often get to see or notice in our busy, everyday lives. The interesting thing about it is that some people will see development and modernization, while others will see loss and destruction. Some will see urban blight eating away at small, disappearing pockets of greenery, and others will see a growing city dotted with green gems.

Comments on the guestbook attest to the visceral impact the show has on people: “the show was an eye-opener,” “there was so much to learn from it” and “it has made many [viewers] see the city with new eyes.” One asked, “It was comforting and somewhat disturbing at the same time. Why is that? Did you intend it that way?"

The answer to this question is yes. "Hopefully [the show] will stimulate some discussion on different levels about the environment and historically important issues," says Alcantara. The show also contributes to historical understanding and visual knowledge of the city's one hundred years. Alcantara chose to mount the exhibit in 2007 instead of during Baguio’s 2009 centennial year to provide some context beforehand. “People will know more about the city’s past and this could generate greater interest for a more meaningful centennial celebration.” Also, historically, much of the construction of Baguio's early buildings began in 1907, exactly 100 years ago. The show also includes an interesting then/now piece: a 1907 clipping from the Far Eastern Review and a 2007 front page of the Baguio Midland Courier, both of which feature Kennon Road prominently as a road that is vital to the city.

Another comment the show has received repeatedly is about its location, the lower basement entrance of SM-Baguio. Many ask why the show is in a mall basement when it belongs in a museum. Alcantara says, “certainly, the show belongs in a permanent venue like a museum, but the purpose of mounting the show in the mall now is precisely to bring it to the public where people already go (as opposed to “making them go” to a museum) and to make it accessible to the widest range of audience.” In this the show has proven wildly successful. There was an astounding minimum of 3000 to 3500 persons per day visiting the exhibit in its first two weeks, based on records of traffic flow taken by SM management. Incredibly, people were not simply breezing through the show. They were standing in line to read the exhibit text and scrutinizing the photos. Some were looking for their office windows or their homes while others were showing their grandchildren where their favorite haunts once stood.

Baguio Then/Now is a fine example of high quality exhibitions that can be achieved and appreciated in Baguio. It is unfortunate that in such efforts, the proponents shoulder the costs of the production independently and without support from the city government. Alcantara has been invited to mount the show in Metro Manila -- The Podium, the Filipino-Chinese Museum, and in no less than The National Museum. This is a great compliment not only to Alcantara as a curator and to the participating photographers, but also to Baguio as a whole. By all means, the show should travel to these and other prestigious venues. However, it would be but fitting for the exhibit to return to Baguio and be permanently mounted there, in a place where teachers, students, and every Baguio citizen would have access to it. It would be wonderful if the local government officials were to recognize the value of this exhibit and acquire it for the city. The City Hall would make a logical home for the photos. Official support could also go towards a school tour since the exhibition serves varied educational goals. It could aid in the teaching of geography, history, architecture, economic and social history, visual communication, journalism, urban planning, and more.

More importantly, Baguio Then/Now is also about the future. The exhibit contains valuable seeds for the growth of critical and creative thinking, and confronts all who love and live in this growing city with vital questions: "Which way forward from here? What kind of city do we want our children's children to live in?" As can be seen from the plans recently issuing from Baguio’s city government, Baguio’s officials see the need and space for more infrastructure, while others decry how Baguio has become crowded, polluted, and overbuilt with no apparent consideration for heritage management, environmental quality, or urban zoning. Now is the time for the people of Baguio to deal with the task of creating a future city with intelligent, decent, and imaginative leaders, a highly educated and well-informed citizenry, and a healthy living environment. One could begin this by visiting Baguio Then/Now, and allowing the photographs to tell you their stories, ask you their questions, and offer you new possibilities, whether you are a local politician, a Baguio old-timer, a frequent visitor, a freshman at one of Baguio’s universities, or a new resident with high hopes for a quiet home nestled among pine trees. The exhibit is on view at the Gallery, Lower Basement, SM until the third week of February, 2008.