December 04, 2007
Reading a dictionary as material culture can tell you a lot about a society.

karya means 'work' or, depending on the context, 'opus' in Bahasa Indonesia.

One of the root word's affixed forms is dikaryakan. It means to use a possession as a means of earning money. The example of usage in the Indonesian-English Dictionary by John Echols and Hassan Shadily goes like this: Mobil dinas mereka dikaryakan. Malam-malam dipakai sebagai taxi. In English: They are earning money with their official cars. They use them as taxis in the evenings. 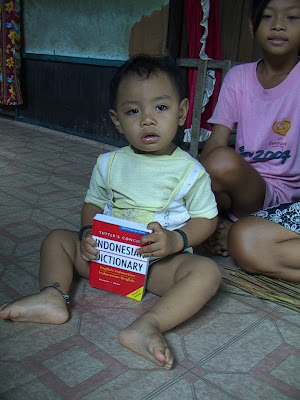 In conversations with Jakarta taxi drivers and Kalimantan villagers I was often told, not without a hint of pride, that in 2003 Indonesia was the Number One corrupt country in the world and the Philippines was only Number Two. (I wonder where they all got the figures from.) When I ventured that things were just as dire in the Philippines as in Indonesia, they countered that nothing could be as bad as korupsi in Indonesia. Apparently it's bad enough that you find examples of it in a dictionary heehee. Here, itss bad enough that it isn't even called corruption anymore. Instead we speak glibly of "gifts", "allowances", and "favors" and pretend that there are no politics behind these things. Somebody should put together a dictionary of the polite language of Gloria Macapal-Arrovo's regime.

admindude said…
Hehe, corrupt nga siguro sa Indonesia but they have better roads than the Philippines. At least that's the impression of a friend who visited Indonesia; ganda daw kalsada doon kumpara sa atin.
5 December 2007 at 08:59

Unknown said…
but if their word for "corruption" is a "loan word" does that mean they were not corrupt before and were corrupted later?
7 December 2007 at 11:22