In the market today I checked out the Stand Up Against Poverty concert organized by Baguio's Primary Eventologist for Socially Relevant Events, Frank Cimatu. It took a long time for the sound system to be set up to the satisfaction of the musicians, so for a long time every one was just on Stand By, not knowing what they were Standing Around For or Against. 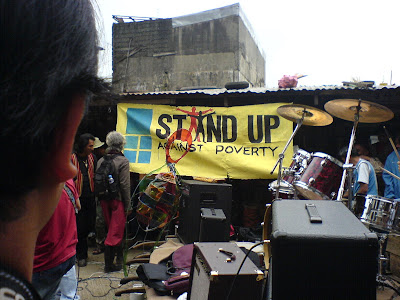 When the sound system was finally ready, emcee Choy explained that they were there to make a statement against poverty and to demand that the government take concrete actions to make poverty history in the Philippines. At first there was no reaction from the men and women standing in the crowd in their aprons and rubber boots, who had just taken a break from scrubbing carrots. But when the petition was passed around people readily signed it. 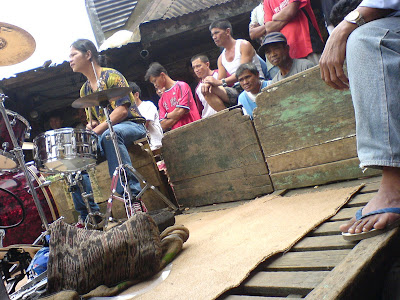 The crowd applauded when the band Binhi took the stage, made of several comboys' karitons. The party against poverty began. Elsewhere, Environment Secretary Lito Atienza (it makes me gag just to write that) stated that it's normal to receive "gifts" from Malacañang in the form of cash or checks. He was reacting to last week's half-baked exposé of our public officials receiving "allowances" ranging from P200,000 to P500,000 from the palace. Acting Justice Secretary Agnes Devanadera seconded the motion, saying there was nothing illegal about it. Exactly how many congressmen and local government officials received this allowance? And how many times? Let's do the math...

These so-called political leaders should have been in the hangar market today, rubbing shoulders with their constituents for inspiration on how to spend their effing "allowance". But we can't expect them to do a thing like that. The holy bishops call it moral bankruptcy. I call it a poverty of imagination. It makes me MAD!

admindude said…
I was a bit alarmed there when you referred to Frank as an eventologist. Akala ko naging parang si Tim Yap. But then read his full title again :-)

Anonymous said…
Butch Dalisay refers to statements akin to Lito Atienza's as the systematic, state-sponsored moronization of the Filipino.

Somehow, I do not see the sellers at the Baguio market as poor. In fact I see very few in Baguio who actually are poor. The market people are merchants, with less capital than others, but with money-making opportunities nevertheless. What they are is squalid, but that is not brought about by poverty, just a defeatist attitude, a perverted sense of entitlement, and a tendency to overbreed.

It alarms me that by a band playing at the market with a slogan like that, the people there might just convince themselves that they ARE.

In Baguio, even with no money we have free airconditioning, sayote everywhere, free land, free spring water, free 'libangan' And judging by all the garbage strewn all around, it seems we have the money to consume lots of goods, too.

Poverty will be history here if we concentrate on tourism instead of the diploma mills as our main source of livelihood, on service side by side with products, on gardens instead of flyovers, on walking instead of riding jeeps.

It was I who commented on Peds' blog using multiply login name, atenara (don't use multiply much). Nowhere near as polite as yours, I'm afraid.

Anonymous said…
Nashman, they do not starve in Baguio like they do in Manila, or even in their home provinces. We do not have a lot of homeless people, they're free to live on the hillsides without anyone shooing them away.

We do not have beggars who approach you in droves, even the kids in the market are able to render a service by carrying bags. Here they have livelihood opportunities, that's why they're arriving in hordes.
We provide cheap quality primary and secondary education that many are availing of. We have a high literacy rate.

I had an ex-employee who had a 600 square meter land grant with a house in Scout Barrio and a car with all kids having finished college who said, "I'm tired of being poor!"

Baguio provides everyone a home and schooling virtually for free, food can be grown even on untitled land. They have extra money to spend on all that gin. The people here may not be rich, but when you come to think of it, they are not poor.
20 October 2007 at 01:07

The Nashman said…
There ARE poor people in baguio. The number is irrelevant and whatever it is, we do our best to help out.

Thanks for the comments and for the spin-off debate!

On being poor: there are many levels of being 'poor', and many things which can be called 'poverty', such as a lack of imagination, if you want to be philosophical about it. In that case, let's call all our local government officials 'poor', shall we?

Now while it's true that there will always be camote and sayote across the Cordilleras, a child having to sell plastic bags in the market is not an indicator of well-being. Many of the things that could pass for relative 'wealth' in Baguio are actually symptoms of poor governance (such as 3-storey, concrete, squatter houses) and poor education (such as gangs and excessive drinking). Many of the things that are being handed out for 'free' (such as land) have real costs behind them and in the long run it's the entire city that's going to pay dearly. (And I mean the long long LONG run. I'm not just talking next generation here, although at the rate things are going...)

Poor us! But as Nash says, we do what we can, each in his/her own fashion, and so does Lisa! See her blog on re-thinking our use of the term 'poor', where the debate continues! Relevant links in a new post.

P.S. Lisa, never mind about being polite! It's your message and ideas that count and if he's really the upright politician he makes himself out to be, he'll see past the criticism and do something in response. At least you still addressed him as "Mayor" hehe. Hanggan ngayon, wala pa ring sagot. Hmmmm. Has the garbage situation improved at all in your neighborhood? Seems to be slightly better here this week.
23 October 2007 at 12:11