July 16, 2007
In fact I had forgotten that it was today, and that it happened on a Monday, 17 years ago. I was reminded only by these three candles that I spotted this morning, while out enjoying a walk on the first, un-clouded, sunny morning in three days. 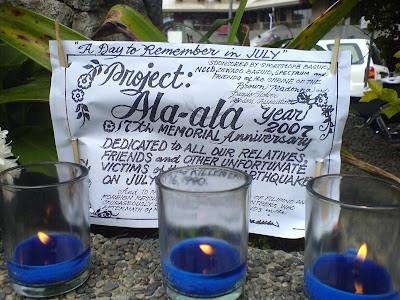 Many people had died on the lot where the candles were lit. Reading the simple sign made the hairs on my arms rise up in a wave until the nape of my neck.

I was standing on a street in QM outside a classmate's house when it struck. We had a clear view of the Baguio Hilltop Hotel collapsing from where we were.

I had to walk home, all the way across town, because no taxis or jeepneys were picking up passengers. Every one was just trying to reach their homes.

When I walked through Burnham Park, I saw some one's hand sticking out from under a fallen concrete welcome arch. I remember the hand was grey with the pallor of death. It was also bloated.

I decided to avoid Session Road, for fear that there would be crowds and more collapsed buildings. I took the long way around.

I tried counting how many collapsed buildings I was passing, but I lost count because I was distracted by my own fear, and by the panic of every one around me.

I broke down and cried when I got home, but every one in our household was alive and unharmed, thank goodness. My only real loss was my dog, which had run away in a panic. My Little Sister declared that she wasn't scared. She only pretended to be scared because every one else around her was scared.

We slept outside the first few nights. We spent the first few days trying to gather news about friends across the city, and trying to send news to relatives outside of the city, to let them know we were alive and well.

For weeks the city was blanketed with the smell of decomposing human bodies.

As soon as it was possible, a soup kitchen was started up in the Cafe by the Ruins. As one of the daily fixtures and gophers at the soup kitchen, I got sent to the Department of Social Welfare and Development once to ask if we could have some of their supply of tarpauline to hang over the serving table and to distribute to the hundreds of people that came for soup everyday. They refused. Maybe because I was just a little brat as far as they were concerned, or maybe because they had other plans for the meters and meters of tarp stacked up in their office. So I argued relentlessly with the DSWD official until she gave in grudgingly and not without a few insults traded between us. I thought my parents would be pleased that I got what I was sent for but later my tatay told me that people are like dogs: They prefer to be praised. Praise would have gotten me the tarp without a fight, and might've earned me a friend in the DSWD. I guess that was my first, real, unforgettable lesson in diplomacy.

For weeks people forgot their usual habits of daily selfishness. The whole city was populated by people struck into nice-ness by disaster, but that didn't last very long.

There was a spring in a lot in the center of our neighborhood. People from all over the barangay would walk to that spring with their baldes, jerry cans, and empty bottles to gather water for drinking, cooking, washing, bathing. That spring kept the whole neighborhood alive.

It's gone now. The Ayalas bought the property when the city was on the rise again. They poured cement over the spring and built high-rise condominiums. Sacrilege! What's more, they did this after promising the residents bordering the spring that they would build in such a way that the condominium could tap the spring, and the residents could still have access to it. The snakes! It was easier to just pour cement over it, claimed their engineer. Let's not forget, these are wealthy, educated people making these decisions. The same wealthy, educated people will be far beyond our reach if and when another earthquake comes along and brings these condominiums that sprouted all over the city to their knees. And then what? Perhaps we could at least expect them to be charitable, should we be so unfortunate as to be struck again.

Today I'm thinking we didn't learn anything from the earthquake. Wait, is it even Disaster Preparedness Month? BFF and the Nashman must run for office! Save our City! Heeheeheeehee. Sorry, I couldn't bear the solemnity any longer. Truth is, I loathed those days for forcing us to live so close to death, and I loved those days for giving us reasons to be grateful, for giving me a go at being useful, and for bringing out the best in many, many anonymous persons who did what they could so that others could survive and the city could get back on its feet again. Too bad we had to make a big shit-hole out of things. Just look at us now.

The city hall siren is ringing now. It's the time that the earthquake struck. Time to click 'publish post'.

The Nashman said…
Morbidly, I miss the camaraderie that happened when the whole purok was sleeping outside in makeshift tents.

The day after the earthquake, I actually took a walk in the city, dead bodies and all. I guess it was therapy. To this day, I don't suffer from nightmares at all which is quite impressive since I saw the Aurora Theatre actually collapse and people jumping off UB. I remember the body bags...etc...
17 July 2007 at 07:34