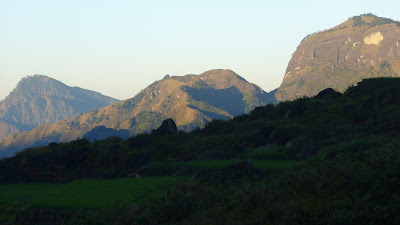 This group is the result of a serendipitous meeting between Lars Kjaerholm, a visiting anthropologist from Aarhus University in Denmark, and Mayor Benito Siadto of Kibungan. They decided to organize a modest "Benguet Symposium" in which different people could get together simply to share information on what is known and what has been written about Benguet, and what we don't know yet.

It was a small and relaxed gathering. Mayor Benito Siadto came with five members of his LGU, including daughter Bren, a UP graduate who is now working as his secretary. Academicians in attendance were Lars, Professors Myrna Sison of Benguet State University and Ike Pikpikan of St. Luis University, both of whom are also members of Maksil ni Ibaloi (MAKNIBA), Professors Caster Palaganas and Letty Tolentino of U.P. Baguio, and yours truly, phd wannabe. The local media was represented by Chi Balmaceda-Guitierrez, Jack Carino, and Dave Leprozo. Prof. Ray Rovillos, Dean of the UP Baguio College of Social Sciences, was the moderator.

The meeting started as a quiet discussion on relevant literature and ongoing studies on Benguet. But when it was the turn of Mayor Siadto to talk about NGO, LGU, and research initiatives in Kibungan, the dry academic discussion quickly transformed into a lively brainstorm on potential research and development initiatives for Kibungan. 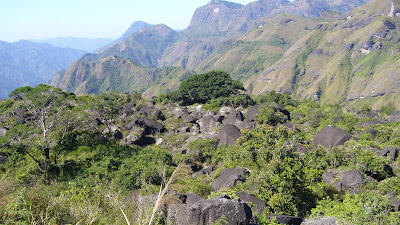 Here's a peek at some of the exciting things we talked about:

Two mummies have gone missing from Kibungan. The media representatives were asked to start an investigative report and try to trace their whereabouts. The mayor suspects that antique traders or collectors might have "connived" with some locals and bought them for a measly sum. He wants the mummies returned and protected in situ.

The LGU is also keen on encouraging the continued cultivation of traditional rice varieties.

They also have plans to start a School of Living Traditions. In this regard, workshops will be held in Kibungan to train local teachers to become local historians.

Mayor Siadto also asked how research could be connected to the development of tourism in Kibungan. Many of those present stressed that Kibungan should set its sights higher than the average, kuripot, sloppy, backpacking crowd. Some suggested an emphasis on cultural and educational tourism. Lars stated that he was interested in bringing anthropology students from Denmark for a winter/summer school term in Kibungan. Homestay programs were suggested. And then, of course, we couldn't get away from jargon so somebody said "local capacity-building" and then somebody else exclaimed, "not just that but local pride"! Mayor Siadto expressed a sharp interest in the concepts of limits to acceptable change and the carrying capacity of small communities.

So the academicians volunteered to participate in future research and planning sessions and to give local training workshops on cultural resource mapping and eco-tourism. The LGU promised to set aside small funds to host the volunteer researchers and trainors. Lars said he would beginning planning a winter school for January next year. The media pledged to write about Kibungan as a destination, and to try to look into possible leads on the mummies.

Dean Rovillos enthused that the meeting was a nice example of how local governments, media, and the academe could collaborate on specific issues. Ever the practical one, Kulot asked how this was all going to push through without seed money, knowing fully well that the LGU would be able to commit a small amount only. When Lars hinted that Aarhus University supported networks, we decided this was the beginning of a "loose network" (a network on the loose?), and we would call ourselves the Friends of Kibungan. 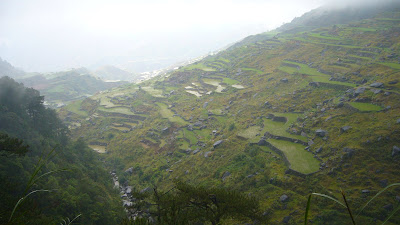 This is just the beginning though...

rich tourists? they just want to live in hotel chains and eat food brought outside the village and stay with the tourist guide....once you attract the big hotel chains that's the end of da village life...

i mean to say "real" backpackers ha...(like those on gap year)

padma said…
Actually, feeling ko backpacker din ako kung yan ang definition natin! But the working definition of a backpacker that most of the quilters had at the meeting was of the puerto-galera-walang-budget type daw. Ewan ko lang, to my shame, i haven't been there and haven't seen these types in the flesh so pinoint out ko nalang that there are many other young (that's us!) travelers who are after something different and willing to go the distance for intercultural sharing experiences.

padma said…
Trulily tarush. Medyo nagulat nga ako. Alam din naman nila that they are not going to be able to attract posh tourists. D pwede ang tatamad-tamad and senor-senorita effect sa Kibungan. But comtutinkopwit, might actually be a good start for them to be mataray, instead of the other end of the spectrum which is to bow to every tourists whim. If you've got links to alternative/ethical travel sites, please share! The LGU folks want to see what other people are up to. This is our chance to sway things our way mwahahahahaaa! (At least I hope it is.)
3 August 2007 at 12:22

rei ann said…
i was irked also. please be careful sa "words" na ginagamit. backpackers are found here @ www.backpacker.com and many other sites.

the backpackers you may be talking about also are the "hitch hikers" type or puro trip ng barkada type and even old men who are "intayo idjay, mayat kano ya".

the backpackers na maporma are just starting out but they can be handled and when they mature after several hiking expeditions, they develop "respect" compared sa mga "puro trip" lang.

Remember that this people hold camera's and blog and chat and have multiply & other accounts in the internet. They are great promoters and they are co-workers.

These are the kind of people who got boracay known ... foreign & filipino (the cause of destruction in boracay & other tourist destinations were the locals and politics/business people) not the travelers, mind you. (study the case studies of world tourism and south east asia including the philippine tourism please before lashing out on us).

Maybe ... these group themselves have to check on what they are talking about also and they should keep travelling "on their" own expense (not grants, not sponsored, and real travel not seminars, not conventions, not invited) to find out what real backpackers are truly made of.
26 March 2008 at 12:12

.....if you are a member of any mountaineeering clubs and took up the basic mountaineering course... we always look for a guide... out of respect to the local community and we are supposed to follow protocols and that is to drop by either the municipal office, the police station, or IF THE COMMUNITY has a tourism office.. then it shall be...

Others aren't probably mature enough but that is the culture in the clubs of travellers that is being encouraged. And oh yes, the columbia did some initiatives to promote kibungan likewise all those maporma people you were talking about did some initiatives of bringing donations to the community, like the mapormang hikers who came from Texas Instruments etc.

We pay our way Sir. We do. It is usually the local community and its politics who do not work on the demans and they become greedy themselves.

Thank you for your insights. I have to say that I generally agree with you. I have put forward certain peoples' points of view in this particular post and I'm really glad to hear dissenting views! I apologize for the fact that my apparently un-funny remarks on a particular maporma stereotype I had in mind hurt your feelings. Stereotypes do have some truth to them. However, based on your comments here, your Kibungan blog, and your shops in Baguio, I would like to point out that I didn't think that you and your fellow mountaineers would belong to the maporma category mentioned above. There's nothing wrong with porma, of course, as long as it's used to dress up true substance, rather than to cloak its absence.

You suggested that the people in the forum that took place look up case studies on tourism. From the little I have read so far, I believe that tourism in general has had both good effects and devastating impacts on local communities. In the case of Kibungan, it would be good and timely to look carefully at both pros and cons (not just the overly-romanticized economic advantages) of tourism, and for the local community to be well-informed so that they can be clear on what they are willing to offer for tourism, and what they expect to get out of it.

Thanks for dropping by and keep up the good work! The world needs more loving souls like yours.

rei ann said…
Apologies ... I have sent my comment ahead before realizing that the blogsite was by a woman...i was typing but my fingers could not catch up with my brain.

Anyways, I was researching for links to share to my marketing consultant and new team for our Kibungan initiative because they are spread out.

We are going back to Kibungan with a plan in less than a month to present our proposal also. And to keep the promise during the previous administration.

YOur blog did give an insight and helped me think better on people to work with also.

I apologize to how I expressed my reaction because I believe that even a "lowly" traveller, whoever and whatever they are... they do contribute goodwill & are always willing to be humbled by their experience. They took the 1st step to widening the horizon.

Now it is up to us, the host, to choose if we welcome them or see money and denude our resources with the "hope" of making money or welcoming a sustainable approach in handling the influx of visitors. (Influx brought about by pioneers and lowly travellers)...

Tourism as an industry did destruct the environment and its people, how? Just like the factories and other establishments contributed to the "destruction" of the environment? but how?

It was the lack of implementation of policies just like any other business in a community.

Remember that education has brought tourists in Baguio... 4 years... because they are what? non permanent residents...

It was not the travellers who are at fault in every tourism destination... It is the governing body, policy makers and the people in the locality ... They became greedy, unruly, and dirty... Tourists just do what? pay...

If there are no prostitutes... there will be no sex tourists... no matter how high is the demand... if we do not supply.

It still boils down on us, as hosts. Our policies, what do we really want to happen to our country?

Thank you for posting my comment and more power!:-)