Altar of Secrets: Sex, Politics and Money in the Philippine Catholic Church

July 06, 2013
On July 13, 2013 at 5:30 PM in Mt. Cloud Bookshop, investigative journalist Aries C. Rufo will speak about his new book, Altar of Secrets: Sex, Politics and Money in the Philippine Catholic Church.


The book "is the first of its kind in the country. Aries C. Rufo shows a Church that is cloaked in secrecy. It keeps the wrongdoings of its bishops and priests -- in sexual misconduct and financial mismanagement -- within its confines and lets them get away, unpunished... Rufo also delves into how the Church influences policy, as nowhere among Catholic countries in the world is the Church deeply involved in the shaping of policy than in the Philippines. Overall, reforms are taking place, but these are highly dependent on the Church leaders, the bishops who try to change mindsets and systems."

"Aries C. Rufo was a beat reporter for the Manila Times and the Manila Standard covering politics, judiciary, and religion before joining Newbreak in 2001. His pieces for the magazine reaped recognition from the Jaime V. Ongpin Awards for Excellence in Journalism. He won second prize in investigative reporting and was finalist in various years for his in-depth stories.


He has received regional awards for his reportage on social issues: the third prize in the Asia Development Bank Institute’s Developing Asia Journalism Awards and first prize for the Asia pacific region in the Lorenzo Natali Journalism Prize for Development." (From the blurb.)

Mt Cloud Bookshop is a local, independent bookstore that aims to bring the written word to life in Baguio City through various literary activities such as author's talks, poetry slams and readings, story-telling sessions for kids, and small workshops. The bookshop is found at Casa Vallejo, Upper Session Road, tel: 424-4437, and is open daily from 10:30 a.m. to 8:00 p.m.

As is always in Mt. Cloud Bookshop, everyone is welcome! 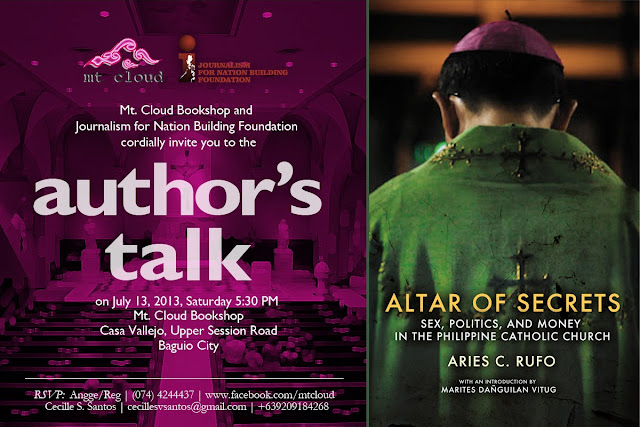