Book-tasting, Day 3: How to compile an inventory

October 17, 2012
"The Italian government has given assurances that something will be done to guarantee the autonomy of our country's universities. Italian universities were autonomous in the Middle Ages, and they functioned better than they do today... In Italy, if a scientist discovers that phlogiston doesn't exist he will most likely be able to announce his findings only if he happens to teach a course on the Axiomatics of Phlogiston, because a course title, once it is on the ministry's lists, can be changed only after protracted negotiations among all the institutions of higher learning in the country, along with the Superior Council of Education, the Minister, and some other organizations whose names escape me. 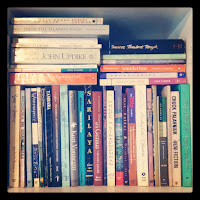 "Research goes forward because someone glimpses a path that no one has seen before, and a few other people, with exceptional decisional flexibility, decide to believe in him or her. But if someone wants to move a desk in Vitipeno, a decision must come from Rome, after consultations with Chivasso, Terentola, Afragola, Montelepre, and Decimomannu, so obviously the desk will only be moved when the move is no longer necessary."

From Eco, Umberto (1998) 'How to Compile an Inventory,' in How to Travel with a Salmon and Other Essays. London: Vintage.