July 08, 2010
I don't consider myself a biker that races. If I remember correctly I've only ever joined 2 mountain bike races in this life, and my third mtb race was also my first downhill race, thanks to the needling and precise coaching of my brothers Behind Bars (at Aky's bikeshop). It all began with an 'innocent' visit to the tracks skillfully built by Team ULAW in Cruz, La Trinidad. For the boys this was going to be the first of a series of practice visits prior to The Flow DH Party on July 3, 2010. For me, it was just going to be play...

"FLOW" is the purrfect word to describe the tracks at Cruz... (If you see these, "...", it means words have failed me and I've floated off into a biking reverie...). Lovely smooth berms, big jumps (which I skipped of course), tight switchbacks... enough roots to shake you up a bit, no rocky threats, one tricky off-camber slope that was as slippery as a wet bar of soap, and a wonderful wonderful wonderful 2-foot drop to flat near the finish, all on a hill blanketed by pine trees, ferns, runo, and grass... My Manong John Frank calls this place sacred spot and you can sense why when the fog rolls in, or when the wind blows, or even when the rain comes at you in sheets at the top of the hill. Sigh... I want to go back there some day. 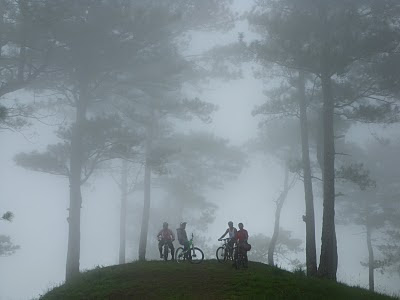 Some of my guardian demonyos on the hill in Cruz.
The others are lurking somewhere in the fog soup.
I love my guardian demonyos to bits!
I had no illusions about completing the track, much less joining the race, but one taste of a small slice of the tracks and I was hooked... And my guardian demonyos, those bad influences that started it all, kept upping the ante by talking me through the most technical bits in great detail. They described where my tires might skid a bit, how I should react to that (ignore), what position my feet should be in (pedals even on the berms, or right foot up on the off-camber turn), what line to follow (down to the precise points my front tire should run over), where to look (ahead, obviously), which way to lean, when to pedal, whether to go faster or slower, don't forget elbows out, and they stood right by the tracks every attempt I made, which made me feel really secure... and WOW the way we all ROARED and laughed and whooped it up when I passed another section! Wheeeeee! That kind of natural high is the best ever... I don't think I learned as much about technical riding skills in my 18 years of mountain biking as I did the three days I went to Cruz with the boys and I will be forever grateful for that.

On race day during practice I had a bad spill that knocked the air out of me on the off-camber slope. I hate that feeling of not being able to breathe. I'm not sure how long it lasted but it was scary enough that I hesitated and jumped off my bike the next time I approached the treacherous turn. I didn't get to try doing a complete run until my first race run so I was shocked at how tired I was before I was even halfway through the track. I had to stop somewhere after the switchbacks to catch my breath and I dismounted and walked down the off-camber slope and had to step aside to let a speeding biker get past me. It took me 6 minutes and 12 seconds -- thrice as much as the best of them hahaha! I was the slowest biker, but I was also the happiest, I think!

So that was my first and maybe, just maybe, not my last downhill race experience.

Unknown said…
Welcome to the dark side, young skywalker! It's all thrills here, no need to suffer up the climbs any more. Worry not about the crashes, or the deterioration of your aerobic fitness, the Rush makes it all worth it...

Raced for the second time on my new dh bike last Sunday (bakulaw was there too) on a bone-rattlingly rocky but mercifully jump free trail called patiis. Lucky for me aside from good equipment, dh also rewards obsessive practice and analysis (lots of both), as much as balls and skills (not much of either), so I was happy with my result.

Hope your boys lent you their bikes and armor, and you aren't racing down on your xc bike without a full face helmet - you still owe me a ride sometime in Baguio!
20 July 2010 at 22:24

padma said…
Thanks, Victor! If I'm tempted to have another go at a downhill race or just play on the tracks (ok, ok, yes I'm giving in to the temptation already!), I will get myself a full-face helmet and shin guards :). I have to say the boys offered but I refused, only because I'm not used to all the gear and feel awkward with it. As for a dh bike -- that may take a while. Well, when are you coming up?
20 July 2010 at 22:46

Unknown said…
Well, full face helmets and armor are very, uhm, personal, especially after a long day. Guess as long as you going slow, its ok.

Might be a while before I get the chance to come up, but will try. Kainggit your Shilan pics!

padma said…
Truth is, I'm a slow poke, especially on climbs. That's why I don't see myself as race material. And that's why I have a snail on my helmet haha! If I had the time I'd head down for the fun ride bit of the Tour 500, but it's not likely I'll be able to escape again that week. I'm sure you'll have a blast (if not a headache from coordinating the whole thing)! Happy trails!
21 July 2010 at 12:51