May 13, 2010
As an anthrogeek I've decided to approach next week's "promotie" (an esoteric dissertation defense ritual practiced in academic circles in the Netherlands) as participant-observation taken to the extreme and to do some research prior to the event.

Apparently, a promovendus (one who would be promoted), is supposed to have two paranimfs. What are paranimfs? I googled paranimfs and found only Dutch information, the most accessible being Wikipedia of course. (Disclaimer: I know. Wikipedia is not the most reliable of sources of information.) I copy-pasted the whole text on paranimfs into babelfish and the translation that came up is priceless so here it is verbatim: (Disclaimer: I know. Yahoo Babelfish is not the best tool for language translation, but the babelfish on the other hand... Oh never mind.) 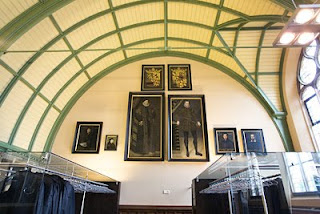 Image source: Leiden University
The promovendus is generally accompanied by two paratrooper nymphs. The original meaning of paratrooper nymph is bride nobleman or bride little girl. In the past to graduate or goes up also was seen as closing a marriage with the university, therefore possible there the declaration of the use lies take along paratrooper nymphs at promotion. Furthermore it is a typical Dutch tradition. Paratrooper nymphs have nowadays especially a ceremonial function, although they are not meant initially to defend the test book in the case the promovendus here itself able is (for example by an accident or sickness), or when the promovendus wants keep back-loop-home for answering a question. Hundreds of years suffered, then academic disputations at a promotion still once high savages blaze up and the minds awfully hot could touch, paratrooper nymphs served as lijfelijke guards. It was very judicious let accompany you as a promovendus by a pair potige guys. In practice current academic, where it reaches but seldom a hand, is the paratrooper nymph frequently a family member, friend (in) or a studiegenoot of the promovendus, and has not inevitably knowledge of matter of the subject of the test book. It therefore an honorary job is, such as testifying at a marriage. One is, however, considered go in the same formal style dressed as the promovendus.

So I'm getting married. To the University. And I'll be assisted by two paratrooper nymph bridesmaids. Whoa.

padma said…
Heehee! Manong Jack, they will be there to keep the promovendus from fainting and to give strong molar support.
17 May 2010 at 03:41