January 31, 2010
2009 rode roughshod over a lot of people. I had a miscarriage in January 2009 and with that baby, who waved at me in the ultrasound with ten fingers and ten toes and a face I could almost recognize, I buried a dream. Even so, I had imagined a seed was planted in that grave and that it would sprout from the earth, grow into a towering tree of love, and spread it's shade above us. Months later I was desperately drowning my sorrow in all the wrong waters. I found myself at the dead-end of a wonderful relationship that had lasted eight and a half years. Hundreds of people were left reeling from the aftermath of Ondoy and Pepeng. I didn't get the giant tree of love I wanted but in it's place a beautiful, lush, disorderly garden was thriving and teeming with untamed life, and death, and life. I only had to see it for what it was.

Also last year, my family mourned the death of a grand aunt whose love for all of us was greater than the sum of all parts of the clan, and whose parting words of advice were, "Enjoy life."

So I began 2010 by wishing my friends hundreds of little heavens and the gift of sight to see and know them in every small instance. Honing this gift of discernment is turning out to be harder than I expected. To get better at it I'm registering, as much as I can, all the little moments of recognition, when I know I am standing in a little bit of heaven on earth. Here is one such moment.

The other day one of my sukis in the market gave -- yes, GAVE! -- me these two delicious pieces of tinapa. 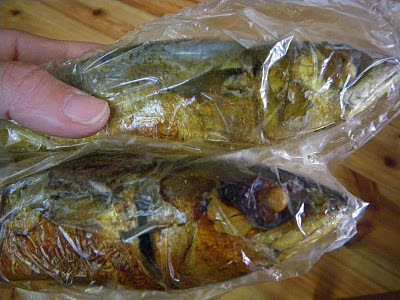 She sells chicken but early last year she diversified and she and her husband began making their own tinapa. When I said I wanted to buy only one piece she put two in the bag and said she was just giving them both to me. She thrust the fish into my basket and waved me away as I protested. I thanked her profusely and walked through the rest of my market route with a big smile plastered on my face. She's one of the reasons I still love our good old market more than I could ever care for the new, antiseptic supermarket chains sprouting all over Baguio.

It's amazing how such a simple gift and brief exchange can outweigh a whole year's misery -- that is, if one has learned how to let go of misery. I'm still learning.