February 25, 2009
An edited (new and improved!) version of this write up is in today's Inquirer.

Portraits of elders with weathered faces, pretty young women in traditional costumes, and mountainsides carved into magnificent rice terraces – these are the trademark images that make up the popular vision of the Cordillera mountain range and its people. Little of this standard imagery is to be found in JP Alipio’s photographic exhibition, Green Shadows, on display at the Victor Oteyza Community Art Space (VOCAS) until March. The collection of photos brings into sharp, almost painful focus a vision of a bountiful environment steadily being laid to waste. 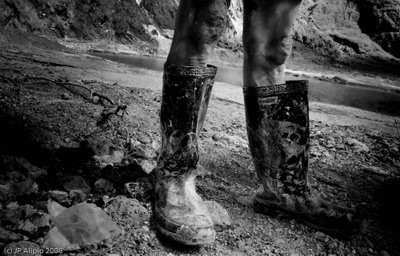 "WASTELAND" by JP Alipio
Commissioned by the Cordillera Green Network, Alipio documented the state of the environment in all the provinces of the region. The experience has changed his scope as a photographer and his stance as an environmentalist.

“It made me more locally-grounded... I’ve moved on from being a hardcore save-the-trees environmentalist. People are important too.”

This is reflected in his photographs and captions, which chronicle a wide spectrum of relationships between humans and nature, ranging from a tenuous balance of give and take, to the toxic outcomes of years of neglect and exploitation.

Of a photo entitled, “New Mountains,” Alipio writes: “Green forested mountains loom in the background as scavengers pick through the waste of La Trinidad. It is a stark and startling contrast that a mountain of waste rises so close to the forests, which provide us with the water that we drink each day.”

In “Green Border Line” the steady march of concrete development is shown eating up the few green breathing spaces left in Baguio City. Still more photos show the spread of vegetable gardens, and the effects of mining, air pollution, and water pollution. Even a photo of a pretty field of flowers entitled “Hope,” is tainted with cyanide and mine tailings. By contrast, other photos show parts of the Cordillera that are still beautiful. The “Cloud Bringers” portrays the intimate link between forests, clouds, and life-giving rain.

The collection was first shown in Mayaoyao, Ifugao, and Lubuagan, Kalinga, during the Cordillera Youth Eco-Summit in January 2009. In Lubuagan, a photo of a mountain spring was exchanged with local government officials as a sipat, or a token of an agreement between the CGN and the people of Lubuagan, in a peace pact-like ceremony. Locals viewing the photos remarked, “We see these problems starting here.” In Mayaoyao, locals commented they didn’t want to let the destruction happen in their areas, but they did not feel the threat of impending environmental decline.

In Baguio, people have reacted with recognition and disgust. As Alipio put it, “City officials can deny that Baguio is polluted, but you can’t deny a photo of a polluted city.”

The message of Green Shadows strikes home with ringing clarity.