June 24, 2008
ADVISORY: If you like old stories passed down through generations that tell of how villages came about then skip the first two paragraphs, which are merely the obligatory academic preludes to an otherwise satisfying story.

The oral history of the genesis of the settlement of Baun Bango is a tale of an ancestor traveling from downriver, along the coast, and back upriver to find work. It alludes to an ethnohistory of migration and livelihood that was dependent on the resources available in shifting landscapes and riverscapes. The narrative also represents a progression towards a prosperous life through hard work, which parallels 21st century aspirations for the future.

The re-telling that follows was reconstructed through a series of oral accounts given by village elders, 60 – 70 years of age. As told by these elders, the history of Baun Bango began at the time when there were only ten villages along the length of the Katingan River. 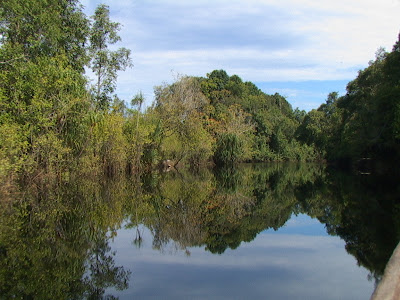 A man named Bango, from the upriver village of Tewang Sanggalan Garing, traveled along the Katingan in search of a good place to live and when he saw a spot that suited his needs, he cleared and burned the forest, and tended a swidden field there. After some years living and swiddening here he went on to another place and never returned. With his departure, the place became known as a bahun, or a swidden field that is left to revert to forest. Since then the area has always been called bahun Bango. That is, the former swidden field of Bango, who was the first man to eke out a living on the said spot. Today no one in the village knows where Bango went, or even where he is buried. The place remained without human occupation for many years.

Over time, many new settlements sprouted up along the Katingan River. Baun Bango was first settled by the family of Miring, a man from the Kapuas River. Miring spent his youth traveling from village to village, stopping in places where he could find work. He married and had children with Sarin, a woman from one of the upriver villages of Katingan. Even after his marriage he continued to travel in search of work. One day, he stopped in a village where he was invited to a feast. People were drinking, dancing, and singing for two days non-stop. By the second day, Miring was so drunk that he slept without getting up from where he was seated. During this time a young couple’s baby had died while they were out working in their swidden field. The parents accused Miring of witchcraft. They asked for his head to replace the life of their child. Miring was given the option to pay a fine, singer, to the couple but he did not have enough money. He inscribed on a bamboo tube a message asking for help and sent it to Mahar, a wealthy relative in Tumbang Ronen. 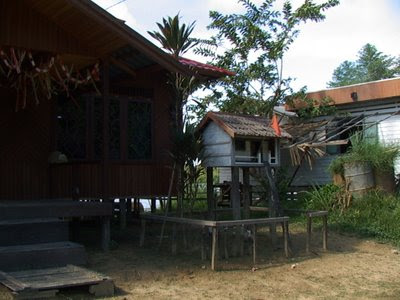 Mahar agreed to help but told Miring that he should become part of Mahar’s household in Tumbang Ronen and harvest and dry his rattan for him. Miring effectively became a jipen, or a debt slave. He had to do everything that Mahar asked him to do. If Mahar was finished eating, Miring would stop working with the rattan and would take the plates and wash them for Mahar. Then he would continue working with the rattan. Miring asked permission from Mahar to bring his family to live close by. Mahar agreed and told Miring that his family could join Mahar’s household. However, Miring did not want his wife and children to live with him as slaves. So he told Mahar that he would find them a place to stay. He chose bahun Bango, which was a short distance upriver from Tumbang Ronen.

While Miring served Mahar as a jipen, his family worked hard in bahun Bango. They cleared new swidden fields, went fishing, gathered forest products, wove mats, made baskets, and traded with merchants and other travellers along the Katingan River. The eldest daughter married a Bugis merchant. Eventually, they were able to accumulate wealth for themselves. They acquired pusaka, or heirlooms such as jars and gongs. These objects gave them status as a family. One day, they sounded their gongs in bahun Bango, and Mahar heard the gongs from Tumbang Ronen. Mahar wanted to know, who were these people who could sound gongs that were louder than his own? He took a boat and rowed towards the sound. He reached bahun Bango and he saw one of Miring’s sons striking a gong to show that he could redeem his father from his debt. Mahar then absolved Miring of his debt and Miring joined his family in bahun Bango. Over the years, the population of bahun Bango increased as people from neighboring villages and from further afield settled and married with the children and grandchildren of Miring and Sarin. Eventually the name of the village’s location became Baun Bango. Many of Baun Bango’s residents today are the direct descendants of Miring and Sarin. Miring is the dato, the ancestor, of the people of Baun Bango. 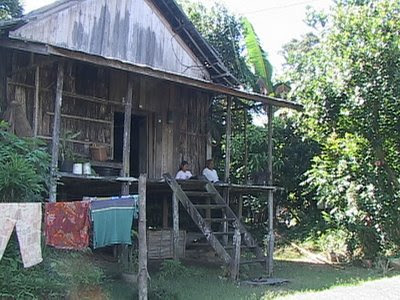