May 03, 2007
ADVISORY: Nice stories from the field laced with a lethal dose of academic ek-ek. However, I would rate this excerpt mildly tolerable. 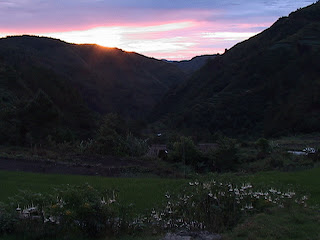 ‘A man was out in the evening catching bats with his net, a tawang, when a group of Spaniards came by and asked him in Spanish, “What is this place?”. The man, who couldn’t speak Spanish, misunderstood the question. He held up his net and said, “This is a tawang, for catching bats.” The Spaniards said to one another, “Ah, we are in Tawangan.” That is how our place got its name.’

This is a story that is told by the Kalanguya residents of Tawangan when asked about the origins of their village. In another version, also told by several Kalanguya, it is an American who comes. He asks for the way to Buguias, and then the story continues in the same way, except that the American whips out a notebook and mispells the word, writing down Tawangan as the name of the place he has passed through.... 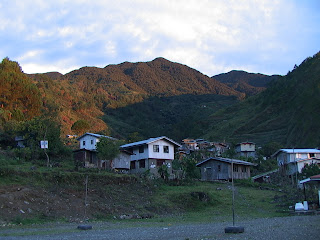 The stories about the naming of Tawangan that I presented above are told from time immemorial. They do not form part of the proofs or documents for the Kabayan ancestral domain claim. However, a very different set of claims are made by the versions of the stories that involve the Spaniard and the American. There are two notable things about these versions: the presence of an Other, and the creation of a place-name through misunderstanding. Indigenous peoples, it has been argued, can only be defined by contrast with an outsider other, with that which they are not (Kuper 2000). Hermeneutically speaking, this otherness immediately limits the extent to which people can know one another, and predicates misunderstanding, which is heightened in the context of colonial relationships (Wolf?). Indeed, many indigenous peoples experience alienation and come to see themselves as marginalized under colonial rule (Niezen 2000?) For Tawangan these stories are told as an assertion of presence in the landscape prior to the arrival of outsiders. In addition, the stories establish Tawangan within the routes not only of indigenous trade, but also in the routes taken by representatives of the colonial states. Tawangan becomes a recorded, geo-political entity, fixed in a notebook or in the knowledge of a few stray colonialists, and much later in maps, affidavits, and municipal development plans. These stories assert inclusion in the historical process of the Philippines becoming a nation, and the genesis of Tawangan as a named and bounded landscape.

There is yet another version of the story of the naming of Tawangan that is strikingly different. 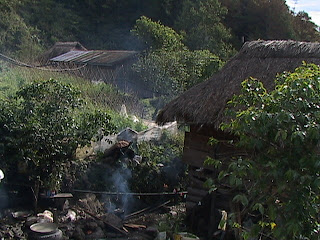 ‘A group of men were on one of the slopes above the valley catching bats with their tawang. A headhunting party came from the hills of Ifugao. They stealthily hid them-selves and watched the bat-hunters, waiting for an opportunity to strike. As they waited, the headhunters noted that their quarry were chewing betel nut quids and spat their reddened saliva out on the ground. They hesitated and said to one another, ‘We should not take heads in the tawangan [roughly translated, ‘the place where people use their tawang, or hunt bats with their tawang’]. They may be our relatives for they chew betel nuts like we do.” And with that, they left the Kalanguya men unharmed.’

This version of the story was told to me by only one elder who lived in a sitio far from the center of Tawangan. When asked about it, other elders merely shrugged and re-told the story about the Spaniard or the American. It is possible that this version of the story is suppressed because headhunting history in general is suppressed. Furthermore, the chewing of betel nut quids is considered by some to be an embarrassing remnant of their alleged backwardness, rather than a shared identity marker among upland communities in the Cordillera. What is remarkable about this story is that the naming of Tawangan stems from an understanding of commonality, a shared landscape, and the possibility of relatedness, rather than from extreme otherness. The story suggests that there is a need to reassess the definition of indigenous peoples through contrast with outsiders who arrive in the landscape at a later time. This freezes the genesis of identity to a single point in time that is first contact. Instead, Ingold suggests, we need to think of identity and personhood as being generated over time, alongside a person’s evolving knowledge of and involvement with the landscape, which always includes other people. As dlkfjaeroid qewrafa nsdjgeofn gl boeskdf!!!