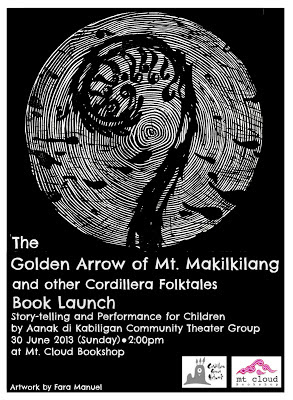 On June 30, 2013 at 2 PM, Mt. Cloud Bookshop will host the launching of the new children’s book, The Golden Arrow of Mt. Makilkilang and Other Cordillera Folktales. The event is open to the public and will include story-telling and a performance for children by the Aanak di Kabiligan Community Theater Group.

After eleven years of telling stories through the Community Theatre, the Cordillera Green Network (CGN) and its theater company, The Aanak di Kabiligan has published a compilation of Cordillera folklore. These stories were the inspiration behind the CGN's successful environmental education campaign, dubbed as the "Eco-Theatre Caravan", a roving theater community of young Cordillerans, theatre artists and volunteers performing in different communities in the Philippines and prefectures in Japan advocating environmental causes through performance.

The book is a collection of folktales from Kalinga, Benguet, Apayao and Mt. Province. These stories were collected during various Youth Eco-Summits around the Cordillera, in which local children turn stories told by their grandparents into theater productions, through a series of community workshops facilitated by the CGN. The tales in the book impart lessons like taking care of the environment and protecting its resources. These lessons are learned through the tales of the brave and clever Gawan and how he fought a monster snake to save Gammilayan; the curious Kankanaeys who discovered the edible fern Paco; the powerful yet generous Ari Moran who led his people to plant rattan; and the strong Bugan who journeyed the river from Sabangan to Kalinga inside the belly of a snake. 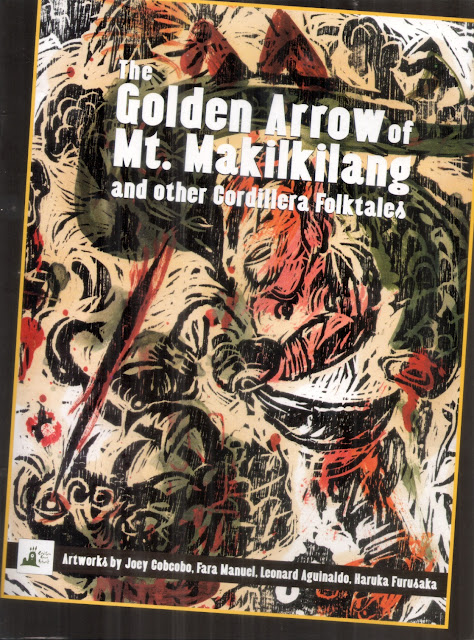 Mt Cloud Bookshop is a local, independent bookstore that aims to bring the written word to life in Baguio City through various literary activities such as author's talks, poetry slams and readings, story-telling sessions for kids, and small workshops. The bookshop is found at Casa Vallejo, Upper Session Road, tel: 424-4437, and is open daily from 10:30 a.m. to 8:00 p.m.

By Rey Angelo Aurelio and Padma.